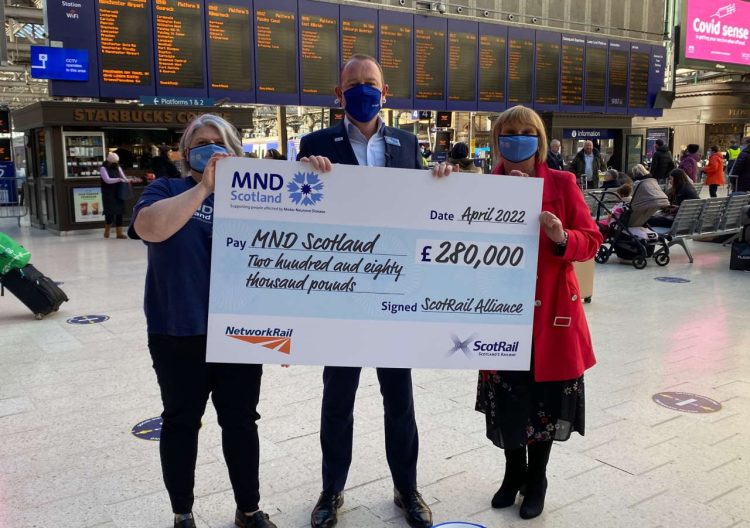 The ScotRail Alliance which is made up of a partnership of ScotRail and Network Rail have donated £280,000 to partner charity MND Scotland.

MND Scotland is a charity that supports people affected by Motor Neurone Disease and has been a charity partner of ScotRail since 2017, and along with the support of Network Rail Scotland, a huge £280,000 has been donated to the charity via staff fundraising, customer donations, and gifts-in-kind such as free advertising at stations and on ScotRail trains.

The partnership has seen MND able to undertake more research in Scotland in a bid to find a cure for Motor Neurone Disease whilst funding practical, emotional and financial support that is provided by the charity to people impacted by the disease. The charity also raises awareness through the partnership via the ‘Journey To a Cure’ campaign.

During the first three years of the partnership, they hoped to raise £150,000 but following generous donations and fundraising efforts, that target was smashed in 2019. In 2020, the partnership was revealed to be extended for another 2 years, until 2022.

The partnership has seen railway staff take part in an array of activities such as sponsored skydives, a trek across the Great Wall of China, abseils from the Forth Rail Bridge, walking on fire and broken glass, and ‘dress down’ days in order to raise funds for the charity.

Glasgow Central station’s famous clock has also been lit up blue, featuring the MND cornflower logo with ScotRail’s trains also features the cornflower branding in a bid to raise awareness.

On-train advertising space has been provided free of charge and whilst Edinburgh Waverley station was undergoing refurbishment, hoarding boards provided eye-catching and hard-hitting visuals to illustrate the impact of MND and how people can donate or access support.

The partnership has also seen the charity able to reach out to a new audience via ScotRail’s social media channels, which has allowed them access to the rail operator’s 400,000 followers.

In June 2021, the life and legacy of MND campaigner, Gordon Aikman BEM, was honoured as ScotRail named one of its iconic Inter7City high-speed trains in his memory. The plaque on the train is in tribute to all that Gordon achieved, and will remain indefinitely on the train providing a lasting legacy for Gordon and MND Scotland.

“It’s been overwhelming to see the generosity of our customers and our staff throughout our partnership with MND Scotland.

“I’m thrilled that we’ve been able to donate £280,000 to MND Scotland over the past five years, but our partnership has been about so much more.

“Through promotion of the fantastic work that MND Scotland do; by providing the charity with a visible presence in our stations through billboards and posters; branding our trains with the MND cornflower; and by proudly naming one of our iconic Inter7City high speed trains in honour of Gordon Aikman, we’ve helped to ensure that everyone in Scotland knows the life-changing impact MND has and what we can all do to make a difference.

“Although our charity partnership with MND Scotland may have come to an end, the journey to a cure is ongoing.”

“Sadly, all good things must come to an end and on behalf of MND Scotland, I would like to say a huge thank you to everyone involved in the ScotRail Alliance for their hard work and commitment over the past five years, which has helped to make our partnership together a resounding success.

“Being able to reach and inform a larger audience about motor neurone disease is something that MND Scotland is constantly striving to achieve, and the amount of awareness raised around MND as a direct result of our partnership alone has been phenomenal.

“As well as helping to increase awareness, the donation of £280,000 is a truly amazing amount of money and a fantastic way to quantify the success that The ScotRail Alliance has achieved. MND Scotland is powered solely by the generosity of donors, and we would like to say well done to everyone at the ScotRail Alliance, along with their engaged community of customers, for raising such a fantastic total.”