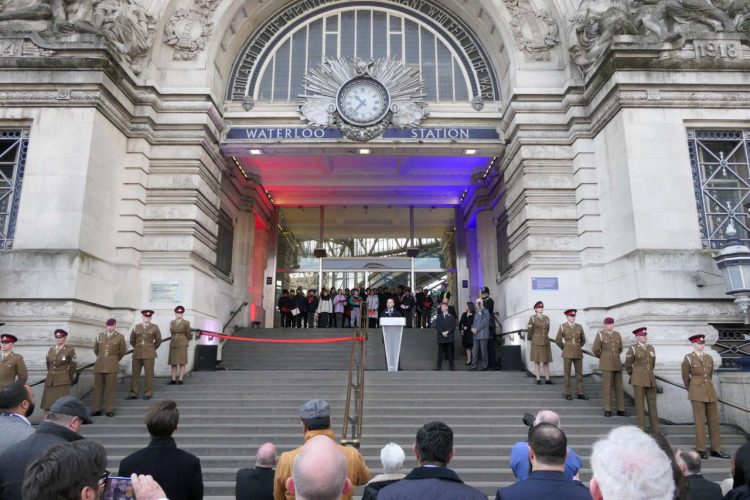 London Waterloo station’s Victory Arch, which was erected 100 years ago to pay tribute to railway colleagues who fought and died in the First World War, has been rededicated.

The Victory Arch, which was designed by the LSWR’s chief architect, J R Scott, is built of Portland stone and bronze and depicts War and Peace, with Britannia holding the torch of liberty above.

The arch forms the main entrance to Waterloo station, leading from Station Approach onto the concourse, and is the only part of station to be listed, at Grade One.

The arch was ceremonially opened by Queen Mary, the grandmother of our present Queen. It also marked the end of a 20-year rebuilding of the station by the London and South Western Railway, leaving the station with much the same layout as it is today.

The rebuilding brought together a collection of disparate buildings and remained in the rebuilt form until the early 1990s, when Nicholas Grimshaw’s international terminal was added to the northern side.

On Monday, 21st March. the arch was rededicated by the Railway Chaplain, Reverend Christopher Penley, supported by a host of senior colleagues from the London and South Western Railway’s successors at Network Rail and South Western Railway, as well as representatives from the Railway Heritage Trust, British Transport Police, and the armed forces. The event featured a number of readings, poems, and a musical performance by a group from Year 6 at the Oasis Academy Johanna school. The last post was sounded at 11.00.

Network Rail Southern region managing director John Halsall said: “Most people travelling through Waterloo probably don’t give the Victory Arch a moment’s thought, but you only have to stop and look at the names to see the sheer scale of the loss of life, and the huge sacrifices made by the people of the railway and their families. By rededicating the arch today we’re paying tribute not just to them but all those who lost their lives in war. I’m proud to be working for the same railway they did.”

South Western Railway’s Managing Director Claire Mann said: “Today brought home to me how all of us working in the rail industry are carrying on a tradition, following in the footsteps of thousands of people before us.

Rededicating the Victory Arch and seeing the names on the walls reinforces how special this is. It’s important we don’t just reflect on the past, but to use it to inspire us to carry on the tradition of selflessness and dedication that our predecessors possessed.”

One in, one out for visiting steam locomotives for Severn Valley gala