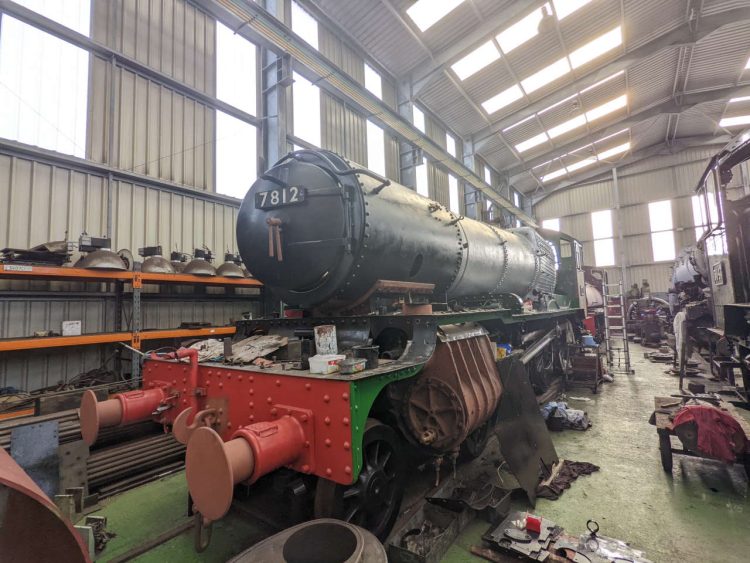 In late February this year, the latest stage in bringing GWR Manor Class No. 7812 Erlestoke Manor back into service was passed when it was reunited with its boiler at Tyseley Locomotive Works.

The boiler ticket of 7812 expired in January 2018, at which time the locomotive was withdrawn from service on the Severn Valley Railway.

It was then transferred to Tyseley Locomotive Works for a major overhaul, but that was much delayed because of the Covid pandemic.

Adrian Hassell, Chair of Erlestoke Manor Fund (EMR), comments “this latest development is a major step towards returning 7812 to SVR operation later in 2022, allowing final assembly and painting to proceed. I particularly want to acknowledge, amongst so many, the work of Tyseley Locomotive Works and the EMF volunteers, who have brought us to this stage”.

Erlestoke Manor was acquired from Woodham’s scrap yard in Barry, South Wales, in May 1974. It was moved first to the Dean Forest Railway at Parkend, and then to the now-closed Dowty Railway Preservation Society at Ashchurch near Tewkesbury in Gloucestershire.

On 23rd April1976, 7812 was moved to the Severn Valley Railway (SVR) at Bewdley for restoration, which was completed in time for 7812 to enter service on the SVR in September 1979.

In spring 1981, the locomotive was failed with boiler tube issues, but these were addressed in time for a return to service in spring 1982. In late 1985 7812 was withdrawn from service with a large crack in an old firebox weld, and its boiler was donated to 7802 Bradley Manor to allow that locomotive to make a quick return to service.

In due course, Erlestoke Manor’s own overhaul was completed and it returned to service in 2008. Eight years later, on 26th August 2016, the engine achieved 100,000 miles of running in preservation, the event being commemorated with a special headboard announcing “Still going strong — 100,000 miles”.

Get steam tour notifications direct to your device!