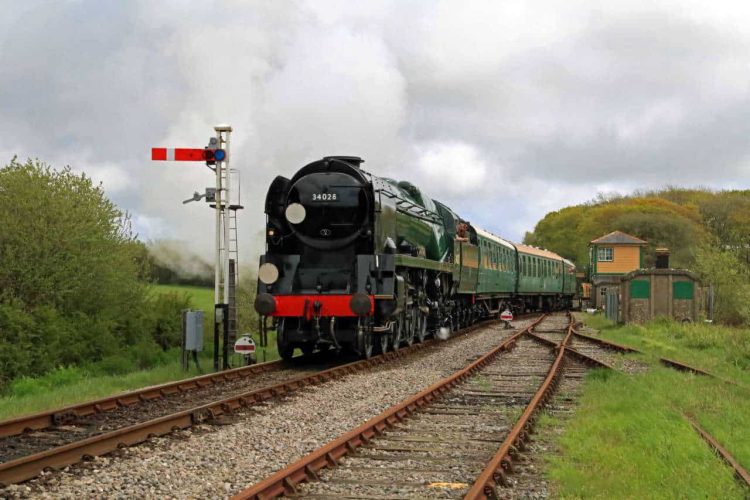 The Gloucestershire Warwickshire Railway (GWSR) has announced that this year’s ‘Cotswold Festival of Steam’ will have the theme ‘Somerset & Dorset Remembered’.

On the Spring bank holiday weekend of Friday, 3rd to Sunday, 5th June, the Mendips will come to the Cotswolds to celebrate the much-loved Somerset & Dorset (S&D) Railway over the Mendips between Bath Green Park and Bournemouth West. The line, over which the ‘Pines Express’ ran, closed 56 years ago on 7th March 1966, a victim of the Beeching cuts.

The event will feature a minimum of four visiting locomotives, which represent classes that regularly ran over the legendary S&D. The first visiting locomotive to be announced was a regular over S&D metals. Bulleid West Country Pacific 34028 Eddystone‘ is visiting courtesy of the Swanage Railway and its owners, Southern Locomotives Ltd. Since returning to steam in 2021 after a major overhaul, this will be Eddystone’s first visit away from its home railway.

As well as the visiting locomotives, the festival will feature all the usual ‘Cotswold Festival of Steam’ attractions:

Discounted advance tickets will be available soon from GWSR at https://www.gwsr.com/major_events.html

The S&D route from Bath Green Park to Bournemouth through the Mendips was challenging with steep gradients. It ran through stunning scenery and was much loved by photographers, not least Mike Esau and Ivo Peters who took hundreds of outstanding photographs and cine films of the route, often including his beloved Mk VI Bentley.

At the time of closure, Ian Allan published an amusing book by W Mills. It was described as a ‘sort of railway history’ and called 4ft 8½ And All That and paid homage to the S & D:

Oh Wellow, Wellow, down the line.
And Blandford Forum too,
Dear Evercreech is out of reach
Now the ‘Pines’ does not pass through

Will Bournemouth West go with the rest
Now that the S and D,
Has heard its last “West Country” blast?
Ask Beeching, don’t ask me!