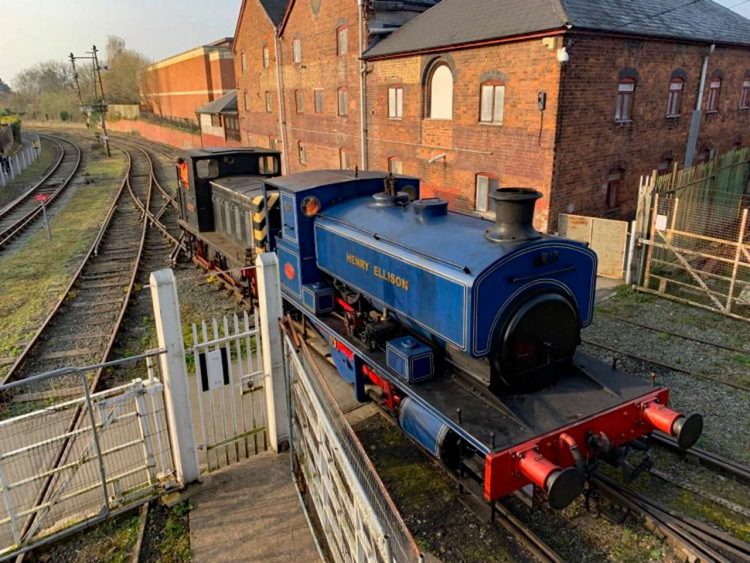 The Cambrian Heritage Railway in Shropshire has secured the loan of Andrew Barclay 0-4-0 steam engine, 2217 Henry Ellison, from the Ecclesbourne Valley Railway for the coming season.

Henry Ellison is an 0-4-0 saddle tank that was built by Andrew Barclay and Sons Ltd at its Caledonia Works at Kilmarnock in Scotland. It spent 23 years working at the Kilnhurst Tar Works of Yorkshire Tar Distillers near Swinton in Rotherham before being made redundant about 1970.

The locomotive was stored at Tinsley in Sheffield for 35 years until being acquired on long-term loan by the Ecclesbourne Valley Railway Association, who have restored it. Following the return to traffic after restoration, 2217 has mostly been used on special events shuttling up and down a 1 in 27 incline to Ravenstor.

The railway’s Grand Opening weekend is on Saturday, 2nd and Sunday, 3rd April, with services running between Oswestry and Weston Wharf. Having lain abandoned for over 50 years. The line is being restored by enthusiasts and will reopen to passengers once again following an official opening ceremony on 1st April.

The line at Oswestry in North Shropshire railway line fell victim to the 1960s Beeching cuts, and lay abandoned and unloved for 50 years, although other parts of the line remained open for freight until the 1980s.

Cambrian Railways once owned 230 miles of track over a large area of mid-Wales, with its headquarters at Oswestry. The railway station at Oswestry opened on 1st May 1860, and the last passenger train ran on 7th November 1966.

In 1972, local heritage enthusiasts came together to keep alive memories of Oswestry as a major railway hub. This resulted in the formation of Cambrian Heritage Railways (CHR). Plans were announced in 2016 to extend the railway from Oswestry to Weston Wharf, since when volunteers from CHR have been hard at work to lay two miles of new track and build a station platform.

Tickets for the Grand Opening weekend are available at: www.cambrianrailways.com