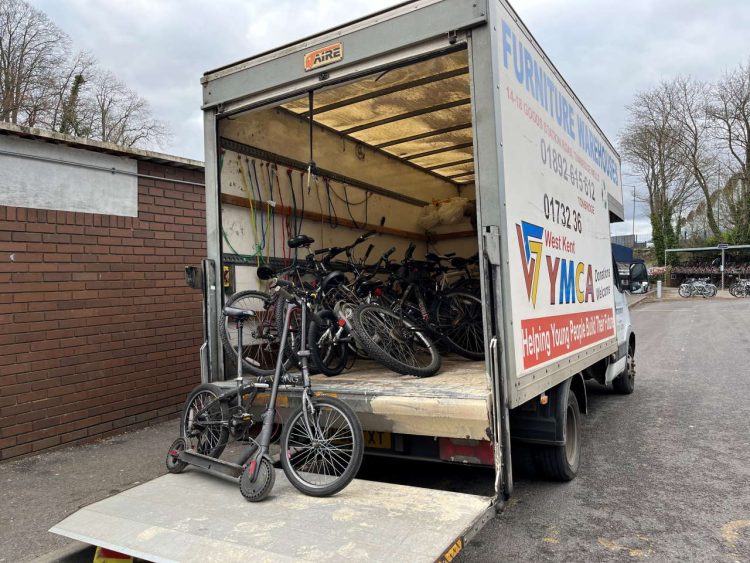 Abandoned bikes left at Southeastern’s local stations have been donated to YMCA West Kent as part of their program which supports young people.

Twice a year, Southeastern donates abandoned bikes from across their network and moves them to Sevenoaks station where they are collected by charity YMCA West Kent.

The donated bikes undergo repair by young people taking part in the charity’s program which offers real experience and the opportunity to learn practical skills which can benefit them within the workplace.

The overhauled bikes are later sold via the YMCA stores at Tower House, Vale Rise, Tonbridge in order to raise funding so that the training programmes can continue to be offered.

Elliott Waters, Station Manager at Sevenoaks, says: “Working with the YMCA over the past three years has been a great way to support the work of the charity to enable young people to develop their skills in bike maintenance, using the bikes that have been left behind at our stations.”

The young people taking part in the project learn all about bike maintenance by building their own bikes which they get to keep, they can then move on to support the project further by working on bikes that can be sold or to assist technicians servicing bikes for customers.

The scheme has supported a young man who was close to being permanently excluded from school, by attending the program one day each week he got some real work experience and developed life skills and is now slowly returning back to school and will sit his GCSEs this summer. The bikes donated by Southeastern have also provided him with the opportunity to take an accredited bike technician course.Amanda Sheer.

Business Development Manager from YMCA, West Kent commented “The project was set up three years ago, but was closed for the majority of lockdown, so is just resurfacing. We are so grateful to Southeastern for the donation of bikes and as a result, we have expanded our offer from student courses for schools to now offering full bike servicing to the local community.”