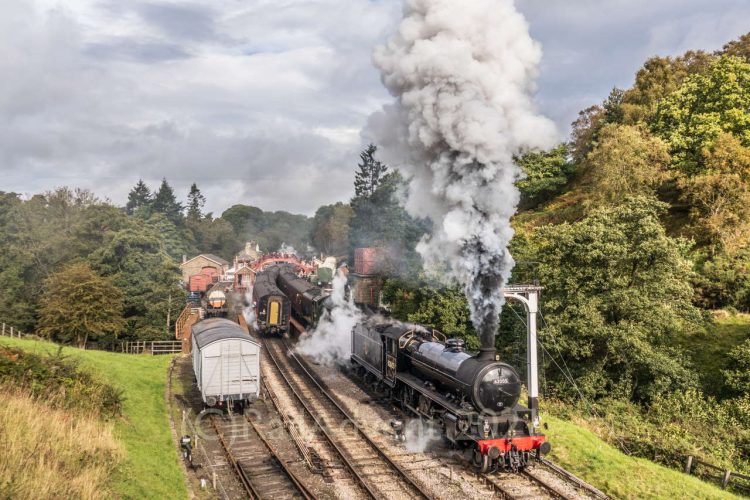 Because of the current conflict in Ukraine, the North Yorkshire Moors Railway (NYMR) has decided to cancel its ‘Railway in Wartime’ weekend that was planned for the autumn, and donate all ticket sale proceeds from that weekend to the British Red Cross’s Ukraine Crisis Appeal.

During the winter, the NYMR had made plans to host the Railway in Wartime event over the weekend of October 14th to 16th 2022.

Activities had been planned to take place along the heritage line, and the railway had begun discussions with local stakeholders to discuss how it would manage and deliver these off-site activities. Because of a reduction of volunteers post pandemic, which has seen a reduction of up to 40% of the railway’s resources, there may also have been problems in staging the railway’s famous military parade.

NYMR Chief Executive Officer, Chris Price, commented: “We did not think it was right to have a wartime-themed event in the calendar, when the people of Ukraine are facing such a tense, dangerous, and distressing time. Ongoing violence is causing people to flee their homes and become separated from their families.

“We appreciate there will be a lot of disappointed people, but we hope everyone understands our decision, and that as many people as possible will still use the railway on that weekend, thus helping to raise thousands of pounds for the Ukraine appeal.”

Laura Strangeway, Director of Corporate Services and Deputy CEO at NYMR, added: “We have taken guidance from the Heritage Railway Association which has recommended to its membership not to schedule wartime re-enactment events for the foreseeable future, and it is with regret that we will not be hosting the annual event.

“The NYMR is aware of the impact to local businesses and will continue to liaise with stakeholders. It is still planning to host its Annual Steam Gala (22-25 September), Light Spectacular (22-30 October), and Santa Special events (selected dates during December), all of which are great opportunities for local businesses to get involved.” The Bickington Steam Railway at Trago Mills near Newton Abbot in Devon is holding a summer steam gala...