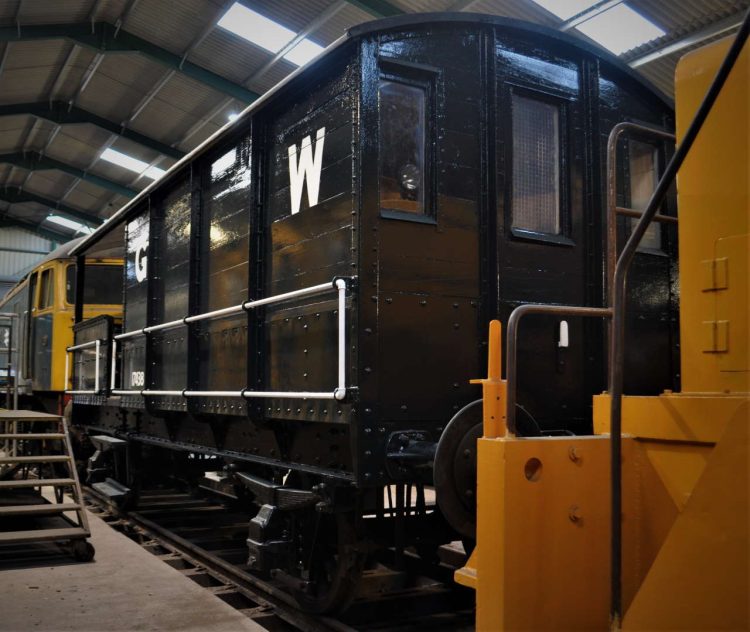 A long term resident of the Mid Norfolk Railway (MNR, the Toad Brake Van is actually privately owned but similar to a lot of heritage railways plays host to a selection of rolling stock items that are privately owned.

The brake vans refurbishment has seen a total rebuild of its wooden body with brand new oak timbers and a full repaint in GWR Black livery making a welcome change from its previous faded livery.

Inside the brake van is arranged as accommodation for use by its owners James and Christ Francis-Beck who are MNR members when working at the railway.

James said: “Since buying the brake van we have been looking to both restore and make it both comfortable but also a useful asset. This we are confident we have achieved so far, but there is more work to be done”.

Ahead of moving to the MNR, the brake van had seen a large amount of mechanical attention and is therefore mechanically sound. Steps for further refurbishment in the future will see the replacement of the metal veranda side sheets.

James is eager for the brake van to be used on the railway as it is one of a small number of brake vans fitted with vacuum brakes and due to this is able to carry passengers and offering the potential for a brake van special at the MNR.

The brake van is used regularly by the railway for weed killing trains on the line, its large veranda makes it an excellent choice for this job.

Originally built in 1941, the brake van was used for special perishable trains operating between Weymouth and Marazion in Cornwall and was later used by BR as a mess van throughout the rebuild of Liverpool Street station.

A GWR heavy freight locomotive will star at the North Norfolk Railway (NNR) for its Bank Holiday Steam...