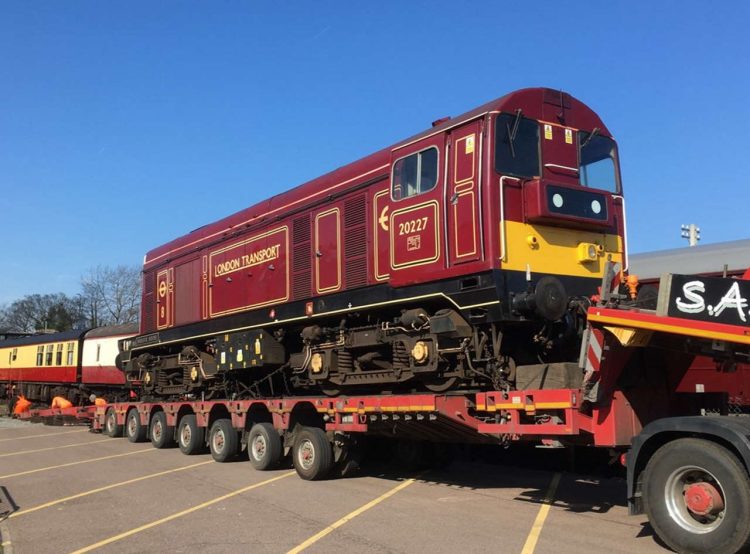 Class 20 No. 20227 Sherlock Holmes has arrived at the North Norfolk Railway in time to operate services on the line throughout this summer.

Sherlock Holmes will be available to operate the line’s popular Cromer dining trains that run on selected Wednesdays and Thursdays from May to September, as well as the “North Norfolkman” dining train that runs on the mainline between Sheringham and Cromer. It will also be making a return trip on the heritage railway’s tracks to Holt.

The locomotive dates from 1968 when it was the last of 228 Class 20s that were constructed by English Electric from 1957 until 1968, making them one of the most successful early diesels.

They were used extensively on freight trains but only used on the occasional passenger train, most notably on summertime specials to seaside resorts such as Skegness.

Now owned by the Class 20 Locomotive Society, which has saved three of the heritage diesels, 20227 arrived at Sheringham by road after almost a year away from the North Norfolk undertaking mainline work. It also spent six months at the Epping Ongar Railway to assist with their trains.

Sherlock Holmes is no stranger to special trains, as it hauled a number of commemorative trains for London Underground in the mid-2000s, and sports the eye-catching maroon livery carried by Metropolitan Railway locomotives.

Commercial Manager Graham Hukins said, “We are very pleased to have ‘Sherlock Holmes’ back on the line. The special trains to Cromer need a locomotive at each end as it’s not possible to move an engine from one end to the other at Cromer Station so 20227 will head the trains as they leave our tracks and head across Sheringham Level crossing and onto Network Rail’s Bittern Line while a steam engine will be at the back ready for the return journey.

“20227’s use won’t be limited to the Cromer trips though, she will also be in use at some of our special events this summer and will also work alongside the line’s steam fleet on a number of other days.”
Full details of the line’s services, including the special dining trains can be found at www.nnrailway.co.uk.

With Mother’s Day just around the corner, why not treat mum to a trip on the Romney Hythe & Dymchurch Railway