Life-saving defibrillators have been vandalised or stolen from several stations throughout Wales. 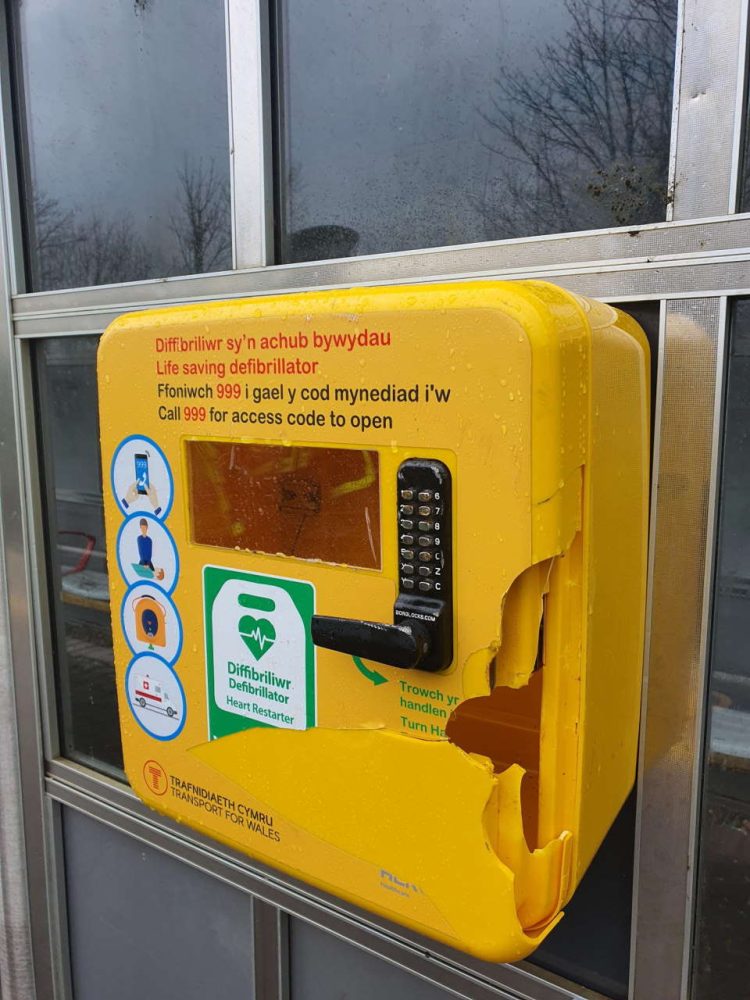 The defibrillators are used to provide a high energy shock to somebody’s heart who is undergoing cardiac arrest, and were recently installed at a number of stations by Transport for Wales.

Over a period of 9 months, 7 incidents have seen defibrillators either damaged or stolen at stations including Pencoed, Ninian Park, Briton Ferry, Sarn, Llandeilio and Llandudno.

Officers patrol stations and camera’s capture incidents so that the offenders can be pursued and prosecuted. Defibrillators have now been locked in cabinets in order to stop further theft or damage.

The British Heart Foundation Cymru states that approximately 2,800 out of hospital cardiac arrests take place in Wales each year with only 1 person in 20 surviving.

“Lives are being put at risk by people who steal and vandalise defibrillators.

“Offenders should think how they would feel if they themselves, or their relatives, were unable to be saved because of equipment being out of order due to vandalism or theft.

“If anyone witnesses anything suspicious on the railway, text us on 61016. In an emergency, always call 999.”

“It is extremely disappointing that within weeks of the first phase of life-saving defibrillators being installed at TfW railway stations, a number have been vandalised and will now need to be repaired.

“The defibrillators are a vital tool for the whole community and this vandalism is putting people’s lives at risk.

“A cardiac arrest can happen to people of all ages and the use of a defibrillator can greatly increase someone’s chance of survival. It’s important the defibrillators are available in key locations, such as railway stations, and in good working order.

“We ask anyone who sees a defibrillator being damaged to call the British Transport Police immediately.”

“Once somebody suffers a cardiac arrest every minute counts. They need immediate CPR from those around them as well as a shock from a defibrillator.

“It’s so disappointing to hear about devices which have been stolen or damaged, which is basically putting lives at risk. If you’re that vandal, imagine if it were a member of your family in cardiac arrest who needed that defibrillator – how would you feel if it wasn’t available? Don’t be that person. We would urge anyone with information to contact police.”

“Every second counts when someone has a cardiac arrest, and, alongside CPR, prompt use of a defibrillator is critical in giving them the best chance of survival. To put it simply – access to a defibrillator could be the difference between life and death, and anyone who vandalises a defibrillator is putting lives at risk.” On Saturday 30th July, a man died at Reading Station. The 24-year-old has been identified as Thomas Parker.