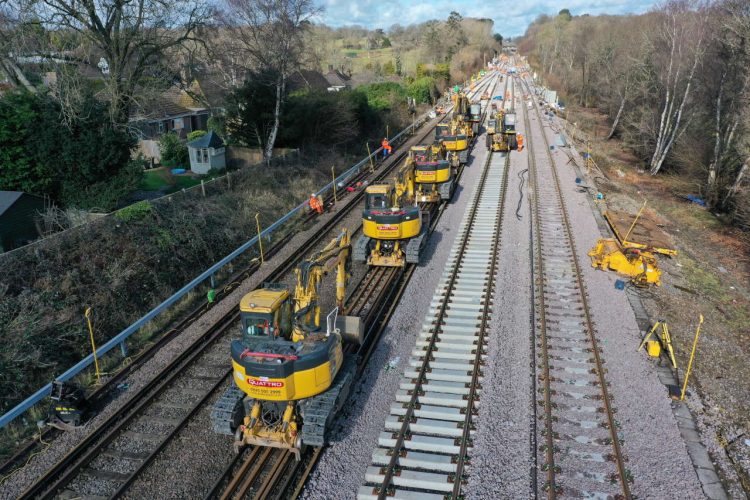 Despite the challenges of Storm Eunice and Storm Franklin, Network Rail engineers have successfully completed improvement works at 30 locations along the Brighton Main Line.

Using 8,000 tonnes of ballast and 1.5km of new track, a crucial rail junction that controls the movement of trains in and out of Brighton and the Ardingly freight branch were relaid, and the track upgraded at Burgess Hill and Clayton tunnel.

At Hassocks, an underpass was built to improve pedestrian access under the railway by removing 4,500 tonnes of earth from the adjacent railway embankment and lifting 24 concrete sections into place to create the underpass. The new underpass replaces the old Woodside pedestrian crossing, which closed in summer 2021 due to safety concerns.

At Haywards Heath, Balcombe, and Hassocks, and in one cutting at Lewes, approximately 500m of reinforced protective walls and more than 1,000 soil nails were used to stabilise around 1km of the embankments. The work will prevent trains being delayed by landslips.

In the Balcombe tunnel, drainage was rebuilt to stop the flooding and water accumulation that has damaged the track and delayed trains in the tunnel since it was built in the 1840s.

In the Clayton tunnel, 200m of brickwork was repaired to prevent leaks and to stop loose bricks from falling onto the track.

On the Brighton Main Line great progress was made in installing high-capacity fibre-optic cable. When it is complete, passengers and people living next to the railway will benefit from faster and uninterrupted internet and mobile connectivity from Brighton to London.

As part of a railway biodiversity programme that will continue after the 9 days biodiversity improvements, including bird and bat box installation, removal of scrub and non-native species, and reseeding areas with colourful native wildflower mix have got underway at Haywards Heath, Wivelsfield, Burgess Hill and Hassocks.

Whilst the works were taking place, Network Rail worked with Southern and Thameslink to provide an enhanced rail-replacement bus service.

Network Rail’s route director for Sussex, Katie Frost, said: “Dealing with the worst storms we’ve seen in years was a massive challenge but our teams battled through and worked more than 35,000 hours to deliver £15 million of investment at more than 30 work sites, and handed back the railway on time for trains to run again on Monday morning.

“We are really grateful to people who had to manage longer journeys and changes to services, and also our railway neighbours who have experienced nine days of major engineering work next to their homes.

“This work will deliver vital safety and reliability benefits for passengers on what is among the UK’s busiest and most congested routes. And, by using an extended closure to do work, we have avoided the alternative of 20 weekends of disruption on the Brighton Main Line.”

Chris Fowler, Customer Services Director for Southern, said: “Network Rail have completed an enormous amount of work that will improve service reliability for our customers across the region, well into the future. With the lines reopened we have already been able to resume direct services between Brighton and London Victoria.

“We’ve worked hard to keep people moving during the work, with special diverted trains and up to 50 buses an hour running from a huge temporary bus hub. Roughly 50,000 journeys were completed by bus, and 100 extra customer services staff have helped to make those journeys as smooth as possible. We’re very grateful to all our customers for your patience, whether you travelled with us or made other arrangements.

“People returning to our services can travel with confidence, knowing that we continue to use powerful virucides giving long-lasting protection at stations and on trains.”

Passengers at Carlisle station can now enjoy smoother journeys as Network Rail’s work to resurface the platforms is now complete.

Network Rail has completed work between Dorridge and Birmingham Moor Street to ensure a more reliable railway before...