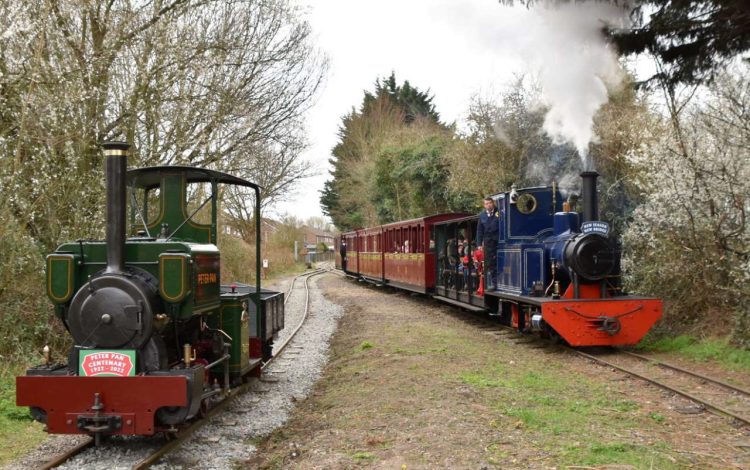 On Sunday, 13th March, the Leighton Buzzard Light Railway (LBLR) reopened for the 2022 Season when the 10.30 departure from Page’s Park was the first public train to operate under a new bridge alongside Vandyke Road in Leighton Buzzard.

Developer Arnold White Group funded the new bridge that carries the new Leighton Buzzard Eastern Link Road over the line, which was diverted a short distance away from its original route.

A second milestone on the opening day was an extra departure operated by popular locomotive Peter Pan, which was celebrating its 100th birthday, having been built by Kerr Stuart of Stoke-on-Trent in March 1922.

The railway will run every Sunday, as well as extra days during school holidays and on bank holiday weekends. Special events planned for March and April include Mother’s Day, with free gifts for mum, and Easter weekend, with free chocolate for children.

The compartment arrangement that was set up in most carriages because of the pandemic has proved popular and has been retained for 2022, although they are no longer allocated and customers can sit where they wish.

The railway’s history is linked with the sand quarrying industry around the town. In addition to equipment from that era, the railway has built up a significant collection of World War I-vintage narrow gauge equipment. The National Railway Museum previously placed its ‘protected’ type Simplex No. 3098 (MR1377/1918) on loan to the railway, and the LBLR is the base for Greensand Railway Museum Trust’s Baldwin 4-6-0T WDLR No. 778.

The railway is based at Page’s Park in Leighton Buzzard. The line runs to Stonehenge Works adjacent to the sand quarries which the original industrial railway was built to serve.

Further information, full details of the railway’s operating days, the timetable, and special events can be found at https://www.buzzrail.uk. The Leighton Buzzard Railway has announced that the Bedfordshire Whisky Festival will return to the railway again this...