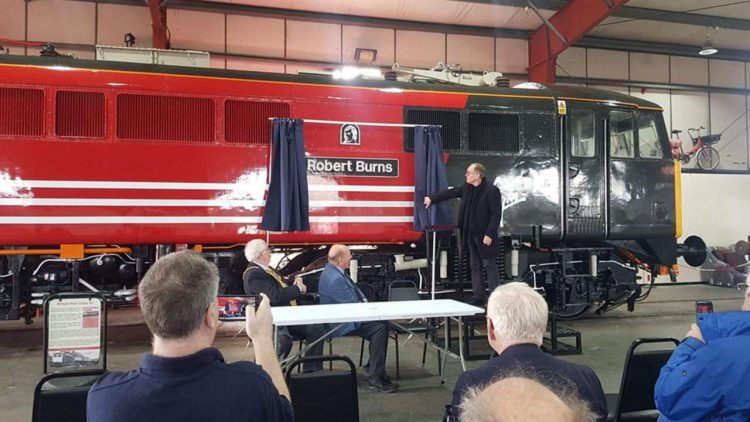 After eight months of hard work by a small group of Crewe Heritage Centre volunteers, 87035 has now been revealed carrying the same livery that it had when withdrawn from service 22 years ago.

A special event was held for the reveal of Class 87 Electric Locomotive 87035 on the 15th of March 2022 in the Heritage Centre’s Exhibition Hall.

The locomotive was also rededicated with Robert Burns nameplates along with new crests and was unveiled by Simon Kohler of Hornby Model Railways with guests attending the event including the Mayor of Crewe, Cllr Tom Dunlop, and representatives of Hornby Magazine.

Special thanks have been given by Crewe Heritage Centre to Virgin Group for kindly allowing them to use Virgin branding and also Durable Castings Ltd of Deeside who kindly donated replica plaques.

87035 ‘Robert Burns’ is a class of electric locomotive built by British Rail Engineering Limited (BREL) between 1973 and 1975 at Crewe Locomotive Works. Thirty-six of these hard-working locomotives were built for passenger services on the West Coast Main Line between London and Glasgow and was the flagship of British Rail’s electric locomotive fleet right through to the late 1980s.

When British Rail was privatised all but one of the class moved to Virgin Trains and kept the fleet in operation until the arrival of the new Class 390 ‘Pendolinos’. 87035 Began service during October 1974 and spent its entire working-life based at Willesden Intercity Depot in London on high-speed services right up to its withdrawal from service in December 2004 where it was placed in storage. September 2005 saw a deal struck between Crewe Heritage Centre and Porterbrook Leasing, which has seen 87035 preserved at the Heritage Centre.

When the new Class 390 ‘Pendolinos’ came into operation, demand for Class 87s decreased and 12 of the fleet were scrapped between 2002 and 2010, however, 21 of the locomotives have been exported to Bulgaria and two further examples 87001 and 87002 are also preserved.