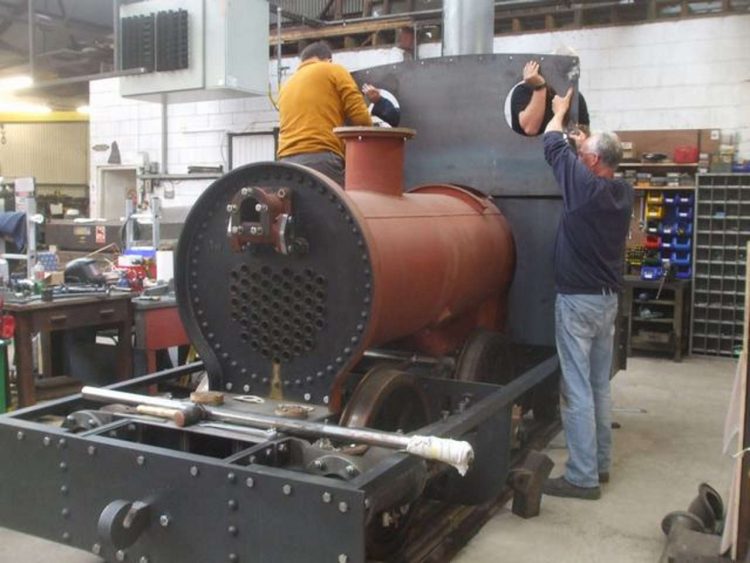 The Corris Railway is hoping that its new steam locomotive, Falcon No. 10, will be in steam by 24th September, although it will not be ready for traffic.

That is the date its builder, Alan Keef Ltd., is holding a 50th Anniversary Open Day at their premises at Lea near Ross-on-Wye in Herefordshire.

After discussions with Alan Keef and a review of the work required, if the target is to be met the railway needs to raise £36,000 by then, which includes a margin for over-running of costs. That figure is in addition to projected income from existing sources.

Falcon’s wheels and motion are complete and have moved by using compressed air. The boiler has been placed in the frames, the cab erected, and the smokebox and other components have been manufactured.

To reduce costs whilst work is underway at Keefs, Corris Railway Society volunteers with engineering skills will produce various components including the saddle tank, firehole door mechanism, and ashpan. They will also finish the cab amongst other jobs.

Components for the brake gear have already produced by volunteers. During the pause in work at Keefs, they have been working on safety valve components, parts of which involved cooling the valve seats in a domestic freezer and burning a bag of nightlights under the dome to expand it. When the dome was slightly expanded and the valve seats contracted, the fitting work was completed.

The railway would welcome sponsorship of these and other components through their website www.corris.co.uk. The same page can also be used to make one-off donations towards the September steaming costs, by cheque or standing order, details of which can be found on the website.

Although the target is to have the locomotive steaming in September, other components and work will be required before the engine is ready to work on the revived section of the railway in the Dulas Valley, north of Machynlleth. But this phase requires an extra £40,000 to be raised for air pumps for braking, sanding gear, fully stripping down and painting, finishing the drawgear, fitting buffers, and final steam testing and commissioning. However, the September steaming target must be reached first.

If the targets are reached, in 2023 two Corris Railway-owned steam locomotives will be at work in the Dulas Valley for the first time since the GWR purchased the Corris in 1930.

London Transport Museum gets Visitor Attraction of the Year award at The 2022 London Tourism Awards. Work is underway at the Corris narrow-gauge railway to remodel the track layout and construct a new platform...