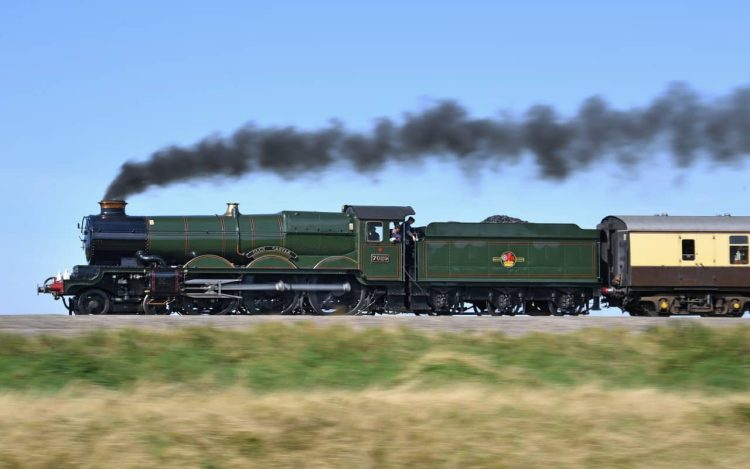 On Saturday 5th March, Clun Castle returned to the former GWR North & West route, 55 years to the day after it hauled the last express train over the line before its closure as a through route from Birmingham Snow Hill.

The GW North & West route from London to Birkenhead via Birmingham ceased to be a through route for express trains on 6th March 1967, when Birmingham’s Snow Hill station closed as a through route.

To mark the closure 55 years ago, four steam-hauled special trains ran on 4th and 5th March 1967. Clun Castle hauled two of these trains: one from Banbury to Chester on Saturday, 4th March and the second from Birmingham to Birkenhead on Sunday, 5th March.

It is quite remarkable that the same engine was able to run over much of the same route from Birmingham to Shrewsbury 55 years later, call at Snow Hill station at the end of the trip, then return to the same depot where it has been based ever since, continually owned by the same charity that preserved it after being withdrawn from British Railways’ service.

In 1964, Clun Castle achieved a record point-to-point timing on a run from Plymouth to Bristol, and the locomotive was considered worthy of preservation as the last working example of its class. It was moved to Tyseley in Birmingham as its future home base before being withdrawn from BR service in 1966.

After being preserved, the locomotive hauled the last through trains on the GWR North & West route in 1967. Since then, it has been a regular main line performer on special trains and on Saturday, 5th March, this year it put in some rousing express performances when it ran some 300 miles from Birmingham on a circular route through Shrewsbury, Hereford, and Oxford, including a sustained high-speed performance along the Great Western Main Line.

A passenger on the train, thrilled with the fast run, said “It was simply the best day out with steam on the mainline since 1967!  Nearly 300 miles of express steam with a superb performance from 7029, the front end chatter could be heard clearly and a joy to hear.” Network Rail is recruiting apprentices in York to train to be the next generation of railway workers, with...