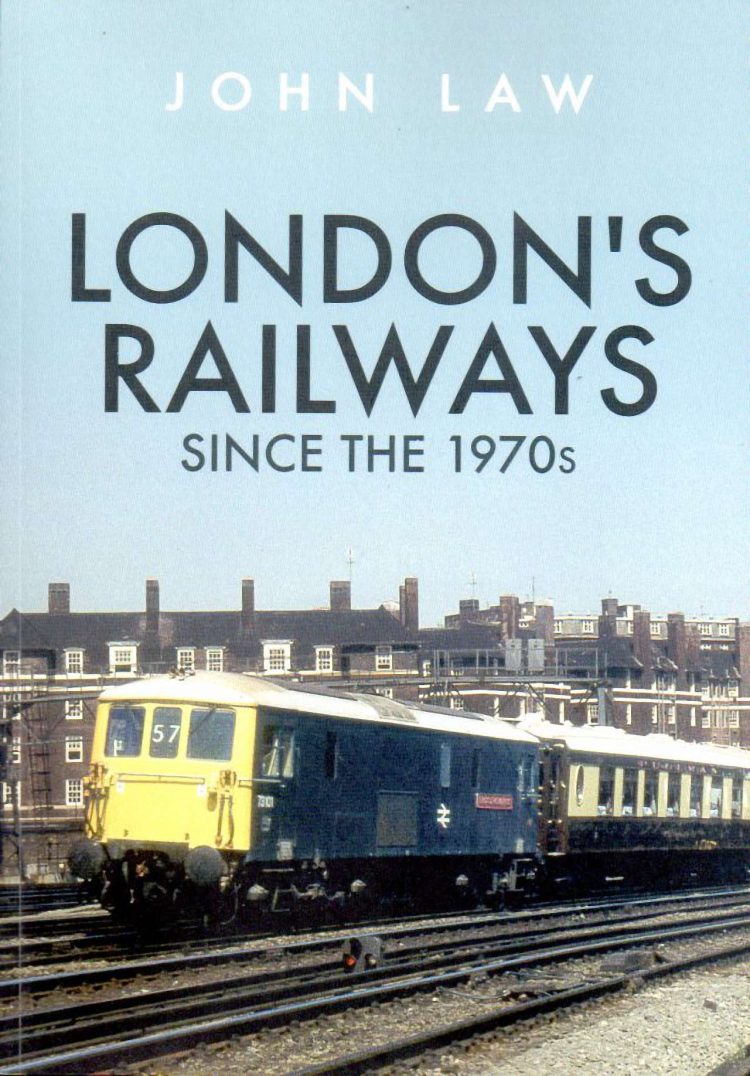 London’s Railways since the 1970s DEALS

Published in August 2021 and written by John Law, this softcover book comes in the usual Amberley format of around 234 x 165mm, is 96 pages long, and has 184 photographs, mostly in colour.

It has a published price of £15.99, and at the time of writing, it can be purchased online from Amazon for £14.

The author has lived in the South East since 1970, and for much of that time, he worked on the railway. During those years, he took an enormous amount of photographs, sometimes in places inaccessible to the public. In this book, he visits major terminals, far-flung branches, and the many depots.

The book is split into chapters, each dealing with the lines out of one of London’s main terminals. Starting with Fenchurch Street and the London, Tilbury, and Southend Lines, each chapter works anti-clockwise around the capital, travelling via the Great Eastern, Great Northern, and Midland Lines, Euston, Marylebone, and the former GWR Lines from Paddington, and finishes with the Southern Region’s South Western, Central, and South Eastern Divisions. London’s Orbital Routes, Underground, and Docklands Light Railway are also included, but it seems odd that they appear between the Great Eastern and Great Northern Lines rather than appearing at the end of the book.

With 184 photographs, mostly in colour, this book will bring back memories for those who remember Class 31s and 37s at Liverpool Street, Class 31s and Deltics at King’s Cross, early AC electrics out of Euston, and Class 47s and 52s at Paddington. IETs, Azumas, and Eurostars bring the story up to date. Not forgotten are the HSTs that started in service in 1975 and were a familiar sight on routes north of the Thames until recent years.

The pages below capture the evolution of the capital’s railways after the end of steam. Merely a pipe dream in the 1970s, the Docklands Light Railway has been a runaway success since it opened. The top-left photo shows one of the original units which were built in Germany and have since returned there, while the lower photo shows one of the later, longer units.

No book about London’s railways in the 1970s would be complete without a photo of a Deltic at King’s Cross, and 9003 Meld, later 55003, fits the bill. Equally commonplace at King’s Cross were Class 31s, and one is captured in the lower photo with the iconic King’s Cross signal box behind.

The following page illustrates changes that have taken place to both inter-city and suburban services out of St. Pancras. For many years, Class 45/46 ‘Peaks’ were the mainstay of services on the Midland lines. They later succumbed to HSTs, and the lower photograph shows one in the National Express livery when that operator ran the franchise.

After the demise of steam, suburban services out of St. Pancras were in the hands of first-generation DMUs. Electrification has now taken over with the inevitable introduction of EMUs, as seen at the lower right.

In the 1980s Marylebone was threatened with closure, but under Chiltern Railways the terminus has been transformed and the line is one of privatisation’s great success stories. At top-left, we see a Class 165, one of the line’s mainstays, while below is a Class 68 which operates some of the line’s services in push-pull mode.

The Western Region stamped its independence in the post-steam era by opting for main line diesels with diesel-hydraulic rather than diesel-electric transmission. Along with Class 42/43 Warships, the Class 52 Westerns held sway for many years as seen bottom-right, until the influx of Class 47s ousted diesel-hydraulics from the scene as at top-right.

Many enthusiasts thought that the end of steam would introduce a stream of identical boxes and signalled the end of their interest in railways. How wrong they were! John Law’s book shows that regardless of which line one chose to visit, there would be a variety of motive power to be seen. Even the DMUs and EMUs have gone through a great change in the last fifty years. In 1970 who could imagine the vast number of different liveries carried by not only members of different classes, but by members of the same class.

In summary, this book from Amberley Publishing is titled London’s Railways since the 1970s and it doesn’t disappoint. It is a great memory-jogger for those who have forgotten how the railway scene around London has changed since 1970. Highly recommended.

The book is available to purchase from Amazon for around £14 as well as from Amberley Publishing.

London’s Railways since the 1970s

The book is titled London’s Railways since the 1970s and it doesn’t disappoint. A great memory-jogger for those who have forgotten how the railway scene around London has changed since 1970. Highly recommended.

London’s Railways since the 1970s DEALS

LNER urges passengers to book ahead with 103,000 bookings made for Easter break