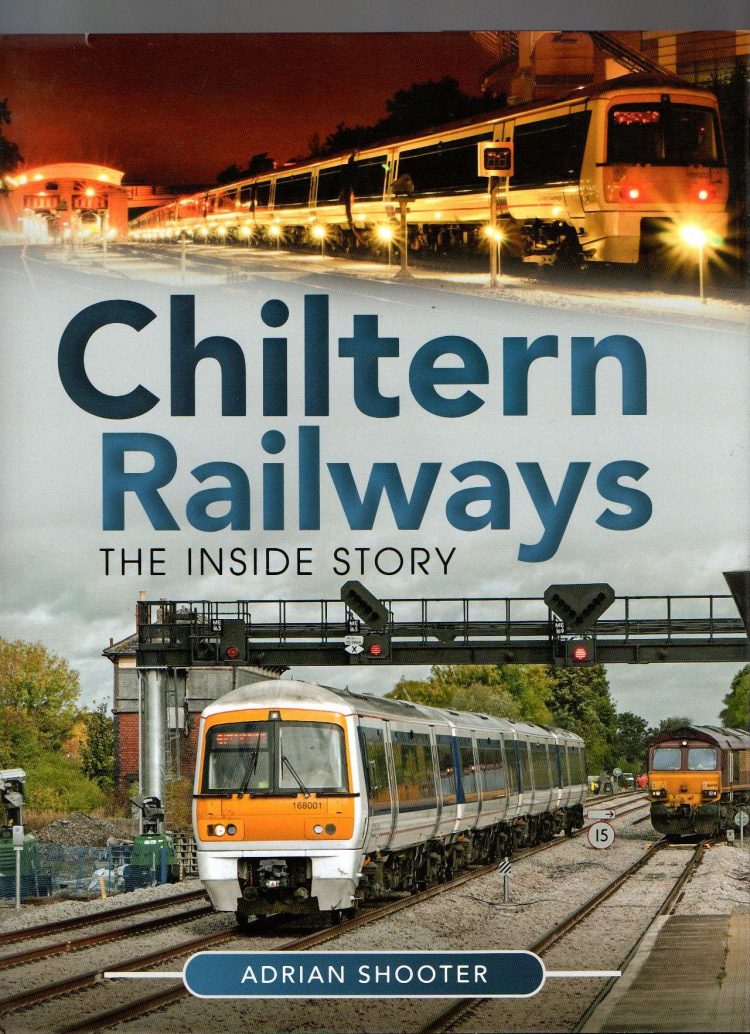 Chiltern Railways - The Inside Story DEALS

Newly published on 8th February this year, this hardback book measures around 28.6 cm x 22.4 cm, is 192 pages long, and has 200 colour and black and white illustrations and several route maps.

It has a published price of £30, and at the time of writing it can be obtained from Amazon for £29.75, although Pen & Sword has it online for a 10% discount at £27. The quality of the finished product is impeccable.

This book is written by Adrian Shooter, former Chairman of Chiltern Railways. It gives an insight into Chiltern’s business strategy and delivery of services, describing how the company came into existence and expanded throughout the early privatisation era.

Adrian Shooter has a long experience in the railway industry, starting as an Engineering Graduate in 1970. He led a Management Buyout for Chiltern Railways in 1996 and led it to become a successful operation until his retirement in 2011. For a book about Chiltern Railways, there is a no more suitable person than the author.

If you are looking for a surfeit of photos of the railway’s mainstay of Class 165 and 168 DMUs at many locations along the line between Marylebone, Birmingham Snow Hill, and Kidderminster, you will be disappointed. Rather, it gives the reader an insight into how Chiltern Railways came into being, and the ethos that has made the company the success that it became.

A safe, punctual railway, providing what the passenger wants, whilst making their journey easy was the author’s aim. He shows how he achieved this despite the Government having no clear strategy for privatisation and their over-reliance on lawyers that cost the taxpayer billions of pounds. Interesting anecdotes are the difficulties of working with bodies such as the Office of Rail Franchising, Strategic Rail Authority, and Network Rail.

Quite tellingly, the author concludes that privatisation happened because of the political dogma that public sector was bad and private sector good.

This book provides an insight into the business strategy and its delivery that underpinned the performance of one of Rail Privatisation’s greatest successes. Throughout, it shows that a railway, like many other endeavours, is a team effort, and that every employee is important. It is easy to read and copiously illustrated.

The book is divided into chapters that describe the railway’s development, including: Introduction to Privatisation; What did I find at Chiltern?; The Management Buyout; Customer Service; Trains; Investment in Infrastructure; A Safe Railway; New 20 Year Franchise; Oxford; Plans that Nearly Happened; Changes in Ownership; and Other Railways. The final chapter, ‘Other Railways’, describes Chiltern’s bids for other franchises, not just inter-city operations but operations such as the Midland and Tyne and Wear Metro, and even a commuter line in Buenos Aires in Argentina.

In the early days of Chiltern Railways, Class 165s were the mainstay of the fleet. An important concept that the Author borrowed from Network SouthEast was that every train was to be washed every day as seen below.

One of the novelties that Chiltern introduced was the use of simulators as part of their drive to improve driver training, which enabled trainee drivers to experience all kinds of incidents in a risk-free environment.

The company’s emphasis as a ‘people’ company is seen in the photo at lower-right where a Class 165 DMU is emblazoned with a ‘Just Married’ banner.

One thing that constrained the company in its early days was the overall maximum speed of 75 mph. In order to meet their franchise commitments, Chiltern needed to raise the line speed, which was done by remodelling various junctions to allow 100 mph running.

RailAdvent Plus members can get up to 25% off selected books on the Pen & Sword website, click here for more details

Chiltern Railways - The Inside Story

A book that provides a valuable insight into the management of a railway company that is widely regarded as one of the success stories of Rail Privatisation in Britain. Each chapter is extremely well researched and eminently readable. The content is a balanced mix of text and photographs, with many of the photographs showing employees who made Chiltern such a success. All photographs are well reproduced and the maps clear without extraneous detail. Highly recommended.

Chiltern Railways - The Inside Story DEALS

This April sees Thomas the Tank Engine return back to the tracks of the East Lancashire Railway!

Nexus is to sponsor a sculpture of Shaun the Sheep on the public arts trail which is set...