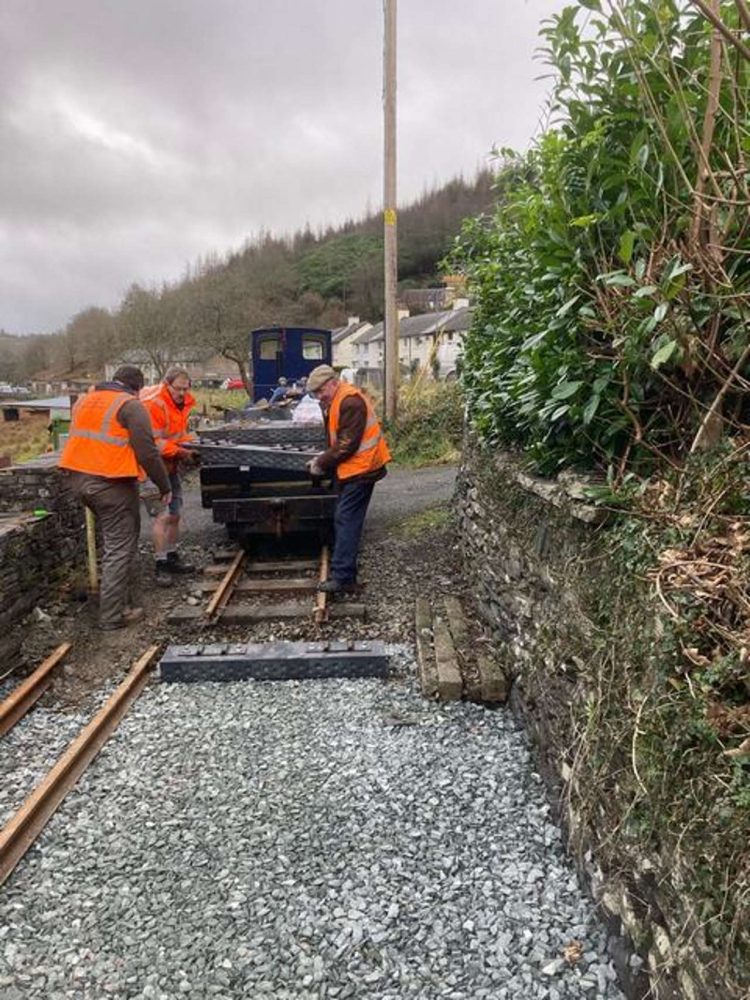 Work is underway at the Corris narrow-gauge railway in Mid Wales to remodel the track layout and construct a new platform at Corris station before train services resume over the Easter Weekend.

The station rebuild is part of ongoing work to revive the oldest narrow-gauge railway in Mid Wales.

The original Corris station was demolished in 1968, but because of present-day site restrictions, it is not possible to recreate completely the former station. However, the new structure will eventually include an overall roof, which made its predecessor an iconic part of the British narrow gauge scene.

During autumn 2021, new sleepers made of recycled plastic were delivered to the railway. Volunteers from the Corris Railway Society then installed the fittings to support the rails.

As well as using recycled material, plastic sleepers are expected to have a life of thirty years before needing replacement.

The volunteers also prepared the vehicles that would make up the works train, and prepared components in the Maespoeth Junction workshops for the new track plan.

A traverser that will allow locomotives to run round their trains is being constructed at Statfold Engineering near Tamworth in Staffordshire. Once the traverser has been delivered and installed, the rest of the trackwork comprising the passenger line and the run-round loop will be put in place and a new platform constructed.

A new point for the station was delivered at the end of January. Over the weekend of 29th and 30th January, new track was laid between the farm crossing and the station throat, and measurements taken to calculate where the new point will be positioned. The plastic sleepered track will be used on the section of line between the station and crossing, but traditional wooden sleepers will be installed in the station area.

After this latest phase of the work is completed further progress will require considerable funds to be raised via donations.

Donations towards the station project can be made online via www.corris.co.uk