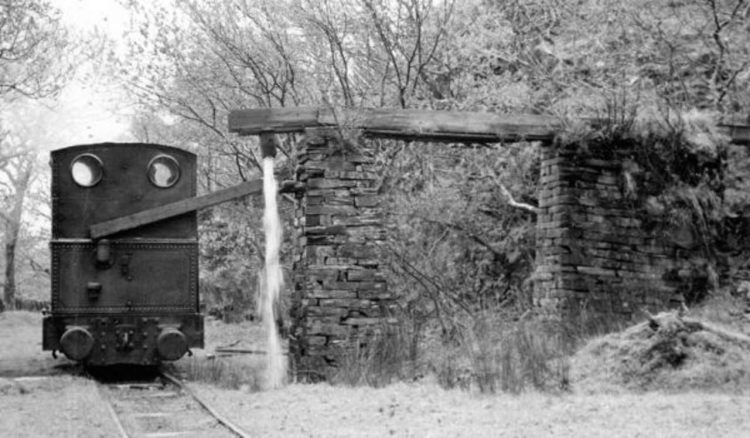 In 2018 the Talyllyn Railway announced that it would be reinstating the railway’s original watering point at Ty Dwr.

Ty Dwr, which is Welsh for Water House, was built where the railway crossed an upland stream rushing down the hillside of Foel Fach to meet the Gwernol just below Hendre barn on the outskirts of Abergynolwyn.

This was an ideal source of free water as it never dried up, even in the driest of summers.

The site is in the woods high above Abergynolwyn and was the site of the railway’s first locomotive shed as the steam locomotives needed a convenient water supply.

After the main works at Pendre were opened during 1867, the watering point continued in use for nearly 90 years, until the columns of the launder were demolished and reused in early 1955 to repair a landslip at Dolgoch. Now the towers are standing once more.

Carson Davidson wrote in the closing lines of the film Railway with a Heart of Gold “For it is a relic, this railway. A bit of ornamental scrollwork, lifted from the pattern of yesterday, and kept; as a memento,”

Much has changed since 1953 when Davidson visited Tywyn for filming, but one outstanding restoration project has always been there: the watering point at Ty Dwr .

Celtic Masonry were contracted for the work and since Christmas have been bringing Ty Dwr back to life.

While the columns represent a huge milestone, the project is far from over as the wooden launders that will carry water from the stream down to the running line still need to be constructed and erected, as well as a flap valve to control the flow of water.

Further donations to help to finish the launders and bring the Stream to the Steam are welcome at https://donate.talyllyn.co.uk/appeal/home/ty-dwr

More about the Ty Dwr project and other projects that the Talyllyn’s Heritage Group are working on are shown in this video: https://youtu.be/FEjZ5ZQWoHI The Corris Railway Society is holding its annual Model Railway Exhibition in Machynlleth over the August Bank Holiday...