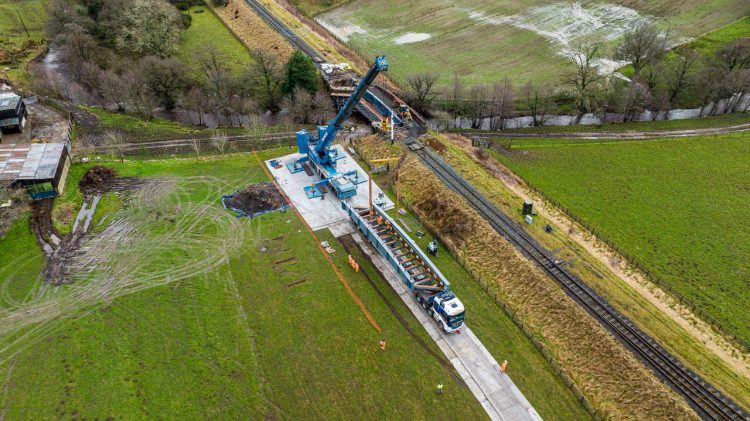 The final stage of construction and installation work at Bridges 24 and 25 at Goathland on the North Yorkshire Moors Railway (NYMR) has been completed.

The £1.26 million project was undertaken by NYMR’s appointed contractor, VolkerLaser.

The final stage saw two new 40-tonne steel structures, each spanning 50 feet, delivered by road from VolkerLaser’s appointed painter’s facility in Sheffield. They were then lowered into place to carry the railway over Eller Beck, replacing the original 150-year old structures.

VolkerLaser started work at the Goathland site in December. The old bridges were dismantled and removed before preparing the site for the installation of the new structure. The ballast and tracks will be relaid by NYMR’s in-house Permanent Way team ready for the 2022 season.

The bridge work forms part of the railway’s £10 million ‘Yorkshire’s Magnificent Journey’ project, which aims to ensure that future generations can enjoy the 180-year-old line. It has been made possible thanks to generous funding from The National Lottery Heritage Fund, the European Union, NYMR’s Local Enterprise Partnership, and kind donations from many supporters.

The Yorkshire’s Magnificent Journey project will make much-needed improvements to the infrastructure, including the replacement of three bridges. The project also focuses on improving access to the railway for those with disabilities, action to conserve and interpret the lineside’s heritage, flora, and fauna, and to provide new opportunities for apprentices and new education and volunteering facilities.

For further information and to donate, please visit nymr.co.uk/YMJ.

Tim Bruce, Director of Civil Engineering at NYMR, commented: “We’ve enjoyed a really good working relationship with VolkerLaser, who were able to step in following the collapse last summer of engineering firm Cleveland Bridge, which was originally scheduled to carry out the work. We are now able to press ahead on schedule to reopen on April 4th.”

Jim Mawson, Operations Director for Steel at VolkerLaser, said: “This week represents the culmination of many hours of planning and preparation, and it is fantastic to see the new bridges being installed on time for NYMR following the removal of the life-expired bridges in January.

“The new bridges will allow NYMR to operate continuously for many decades, and we at VolkerLaser are proud to be involved, and to be included in the Yorkshire’s Magnificent Journey project.”

Storm Eunice: ALL trains cancelled in Wales this Friday Carers Plus Yorkshire and the North Yorkshire Moors Railway (NYMR) have collaborated for the Festival of Green this...