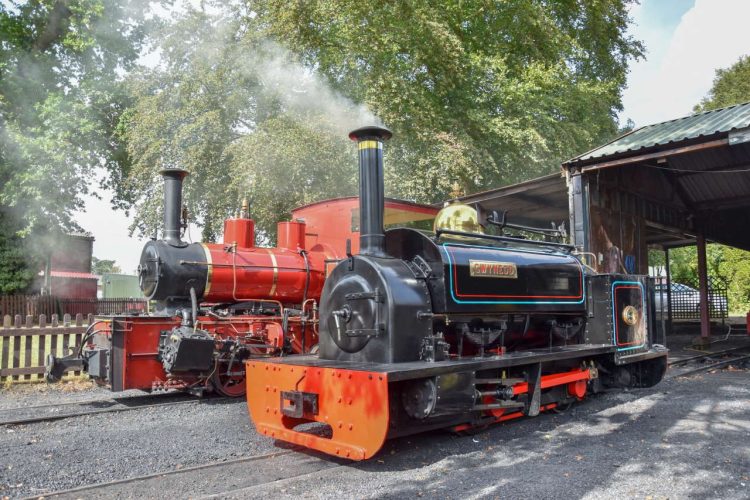 The Statfold Barn Railway, based near Tamworth in Staffordshire, is holding an enthusiast’s weekend on 19th and 20th March.

The event is titled “Enthusiast Weekend: Last Days of Penrhyn Steam” and will reunite some of the last locomotives to operate on the Penrhyn Quarry Railway.

Attending from Bressingham Steam & Gardens will be one of the first locomotives for the Penrhyn system, Hunslet 316 of 1883 Gwynedd, which will be reunited with visiting Avonside Ogwen, Statfold’s own Avonside Marchlyn, recently-restored Andrew Barclay Cegin, whilst Sybil Mary and GP39 will complete the Penrhyn line-up.

Since then, Gwynedd has been fully rebuilt and has worked at Bressingham for more than 50 years. She was most recently overhauled and returned to service in 2016 in its original late Penrhyn Quarry Railway livery. She visited the Ffestiniog Railway and Bala Lake Railway in 2018.

Steam ceased to operate at the Penrhyn Quarry on 15th January 1965 when Iorwerth Jones signed the cab of Avonside locomotive Ogwen after his last day driving steam locomotives in the quarry. After this Ogwen and five other Penrhyn locomotives were sold to an American antiques dealer, CB Arenette, and shipped across the Atlantic Ocean to the United States.

The Last Days of Penrhyn Steam weekend promises to be a steam spectacular, and should not be missed. Anyone wishing to attend should book now to avoid disappointment on the Statfold Barn website at https://www.statfold.com/lastdaysofpenrhynsteam

Unfortunately, no children under the age of 10 are allowed.

Statfold Barn is on the B5493 three miles from Tamworth.

DO NOT TRAVEL: London Kings Cross, Marylebone and Euston services all suspended due to Storm Eunice