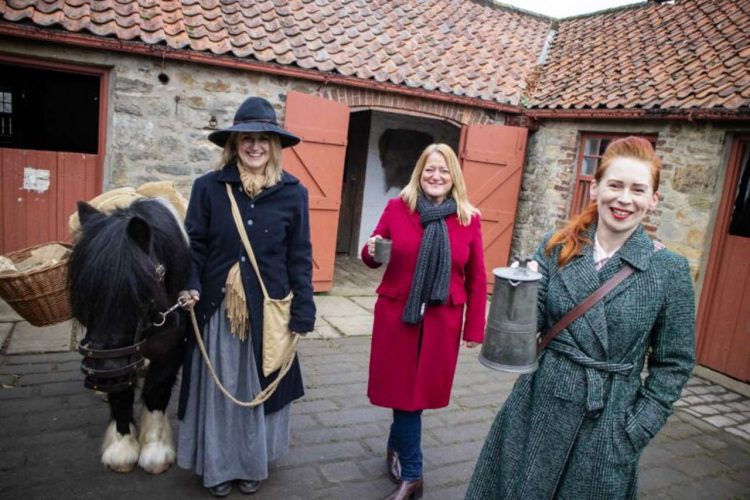 Beamish, The Living Museum of the North, has received a £150,000 grant from the Sir James Knott Trust for the museum’s Remaking Beamish project.

The trust supports charitable activity in the North East and aims to improve the lives of people living and working in the region. The grant is the latest example of the trust’s support for culture and heritage in the region and comes as County Durham is bidding to become UK City of Culture 2025.

Remaking Beamish is a £20million project that will allow existing buildings from the late-18th century and early-19th century to be brought back into use in the museum’s stunning Georgian landscape.

Visitors will be able to discover early cottage industries at a pottery and blacksmith’s workshop, stay overnight at the museum in period-style self-catering cottages which are original to the site, and enjoy refreshments in the drovers’ tavern and tap room.

The Georgian development is on a former droving route, and the museum will tell this story of drovers who moved livestock up and down the country, taking shelter and refreshments at taverns which were often incorporated into farmsteads.

As well as the Georgian developments, there will be a 1950s town, farm, and transport including a bus depot, and is the biggest project in the museum’s 52-year history. Opening celebrations for the 1950s farm, Spain’s Field Farm, will be held in spring 2022.

The developments are due to be completed in 2023. The next stage to open will be the town’s Front Street terrace this month. The terrace includes John’s Café, Elizabeth’s Hairdresser’s, Middleton’s fish and chip shop, and No. 2 Front Street, which is a replica of the home of North East artist Norman Cornish.

Sally Dixon, Beamish’s Assistant Director Partnerships & Communications, said: “We have a long-standing relationship with the Sir James Knott Trust, and are hugely grateful for their support. This is the latest of a number of Beamish projects the Trust has funded over the years, and they have been instrumental in helping the museum to develop into the robust, resilient position it is in today.

“The Trust’s latest grant will enable the museum to tell a more rounded story of everyday working life during Georgian times, and crucially, welcome visitors to stay overnight – generating income which goes back to the charity. We are thrilled that the Trust is so supportive of both the museum and Durham 2025. Exciting times ahead!”

“Building a better future for people in the region based on thriving communities, good jobs and a great cultural offer is important. Creating a healthy belief that the future will be better than the past and the present is crucial. We support Durham’s aspirations and are grateful to be part of it. The funding award to Beamish’s Georgian developments was a fantastic way of both helping the museum deliver even more for its communities, and demonstrating the Trust’s support of Durham 2025.”

County Durham is bidding to be named UK City of Culture 2025 and is one of eight longlisted locations. The Durham 2025 campaign is being spearheaded by Durham County Council, Durham University and Culture Durham, a partnership of cultural organisations from across the county, including Beamish. The bid will be submitted to the Department for Digital, Culture, Media and Sport by the beginning of February ahead of shortlisting in March, with the overall winner expected to be announced in May.

Tony Harrington, Culture Durham Chair, said: “It’s absolutely fantastic to see key funders from the region really get behind the Durham 2025 bid and show their support in such a demonstrable way. We can only fully realise the county’s potential through collaboration and through working together with partners and funders such as Sir James Knott Trust, and we’re looking forward to dialogue with other trusts and foundations based in the region over the coming months.

“Previous Cities of Culture have really shown the transformational impact culture can have for people and places, and we’re doing everything we can to secure the investment and profile the designation brings, at a time when the region most needs it. Thanks again to the Trust!

Half Term: Swindon’s STEAM Museum looks into the modernisation of the Great Western Railway Beamish, the living museum of the North are offering special video calls to Father Christmas from the comfort...