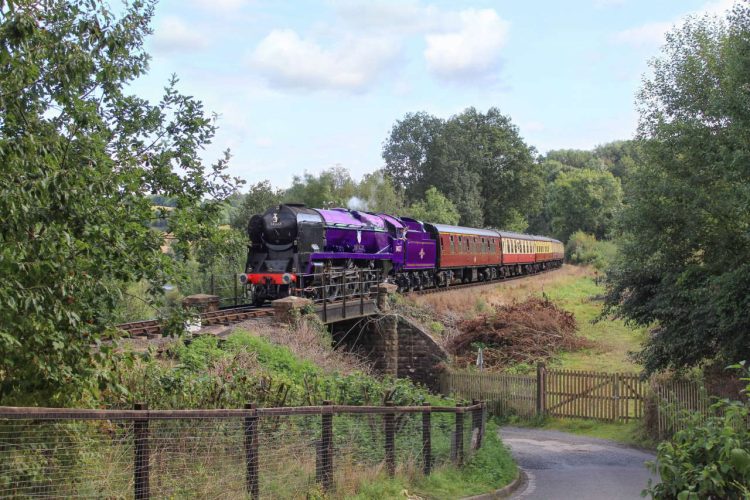 The locomotive is being temporarily repainted purple to honour HM The Queen and is now asking the public to vote for a new name. You can see full details of the repaint in our article by clicking here.

When the plan to repaint the locomotive was first revealed, it caused a sensation on social media and in the press. The initial Facebook post attracted 7,200 interactions from across the world and was shared over 300 times.

The railway has received almost 1,200 name suggestions. With the help of the loco’s owners, a shortlist of four have been chosen: Elizabeth II, Gloriana, Severn Majesty, and Valley Monarch.

The name that receives the most votes will be cast onto authentic nameplates. These will be affixed to the engine in readiness for a VIP ceremony on Thursday, 2nd June, which is the start of the extended Bank Holiday weekend to celebrate the Jubilee.

The website where people can vote for their preferred name is http://www.svr.co.uk/namealoco, and all those who vote will have the chance to enter a prize draw to win a family travel ticket for the SVR.

The name change and repaint are purely temporary measures; the locomotive will be restored to its original name and livery later this year.

Head of visitor experience at the SVR, Michael Dunn said “We’re very excited about unveiling our unique locomotive later this year. From the reaction we’ve had so far we think it’s going to prove a huge draw over the summer.

“We’re going all out this year to celebrate both The Queen’s Platinum Jubilee and the 2022 Commonwealth Games which are being held in Birmingham. There’ll be a limited time period when people can visit the SVR to see this very special locomotive, and we can’t wait to welcome everyone.”