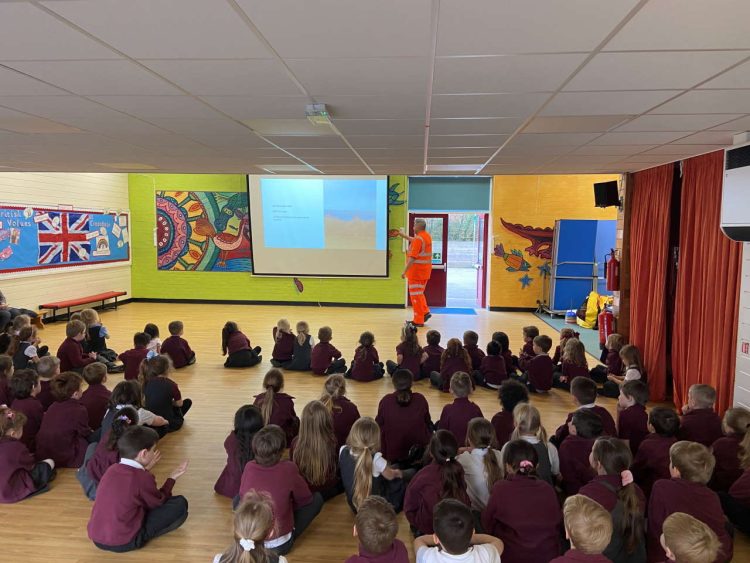 The educational event was run by Rod Storer, Depot Safety Manager and Chris Parsons SHEQ Manager of GB Railfreight’s (GBRf’s) Rail Innovation and Development Centre (RIDC) Melton which is based in Melton Mowbray in Leicestershire. The sessions saw Rod and Chris host a selection of presentations that had been specially created for Key Stage 1 and 2 pupils.

The initiative is part of GBRf’s bid to raise awareness in local communities regarding its work at RIDC Melton and saw the children take part in sessions on the dedicated train testing facility and its electrified high and low-speed test tracks.

Safety talks have already been delivered by GBRf in the area to Asfordby Hill School in Leicestershire and are set to visit more schools in the East Midlands area.

“RIDC Melton can be extremely dangerous if people do not understand the risks associated with an electrified test track. We are committed to educating communities local to our operation, especially children, to ensure they are aware of the dangers that exist.

“We hope the children of Crossdale school not only found the sessions engaging and informative but have taken on the serious message that the railway is not a playground and ignoring important rules can result in life-changing consequences.”

The GBRf RIDC Melton has been in operation after receiving a four-year contract from Network Rail in April 2021. The facility allows safe and reliable testing for both new and modified rail industry technology and features two test tracks one of which is a 13-mile high-speed track that runs at speeds of up to 125mph between Melton Junction and Edwalton, 11 miles of which includes 25kV overhead line equipment (OLE).

The facility also features a lower speed 4-mile track that runs at speeds of up to 60mph and also features 25kV OLE as well as DC 4th rail capability between Old Dalby and Stanton Tunnel.