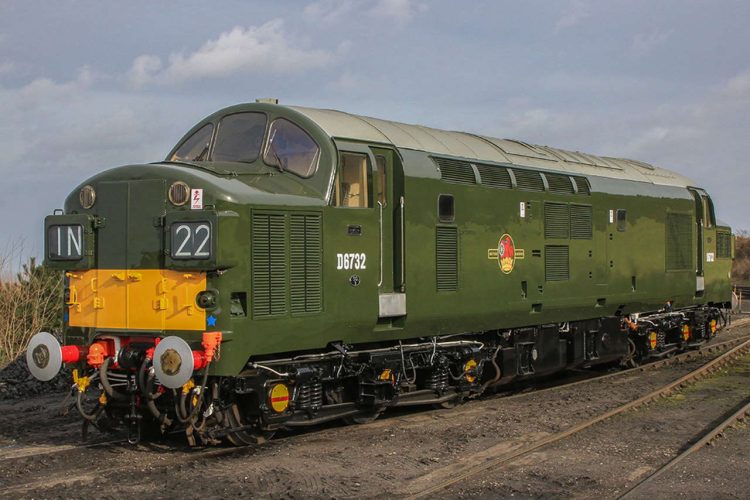 Saturday, 26 March, will be the 60th Birthday of Class 37 D6732, and it will be in action at the head of the North Norfolk Railway’s diesel services to celebrate the day.

Its return to service follows a thorough repaint into the British Railways’ green it carried when it first entered service in March 1962. Over 300 English Electric Type 3s were built between 1960 and 1965 as part of British Railways’ modernisation plan.

The line’s Day Rover tickets allow unlimited travel all day and passengers, whilst anyone booking online in advance at https://shop.nnrailway.co.uk/running_day_tickets.php will receive a generous discount.

D6732 was initially allocated to Hull Dairycoates depot, and for much of its career worked passenger and freight trains in the North West. Under the BR TOPS scheme, it carried numbers 37032 and 37353, and from October 1992 until March 1994 it carried the name Mirage.

It became the first Class 37 to work in preservation in 1996 when it hauled its first train on the North Norfolk Railway. Class 37s were no strangers to the area as some of D6732’s classmates saw regular use on InterCity services from London to Norwich, and on Liverpool Street to Cambridge and King’s Lynn services. Amongst enthusiasts, the class is known as ‘tractors’ from the distinctive agricultural sound of the engines.

On 26th March, the locomotive will be paired with the line’s rake of four “Suburban” coaches dating from the mid-1950s. These received a refresh over the winter in the line’s Carriage & Wagon works at Weybourne. The Carriage & Wagon team also undertook bodywork repairs to D6732, before specialist contractors from Heritage Painting Limited carried out the most comprehensive repaint the loco has received in over a quarter of a century.

Locomotive owner, Alistair Barham, praised the Heritage Painting team. “The thoroughness of the preparation and the care they have taken with the repainting and signwriting was very impressive and the loco now looks as good as she did when she first turned a wheel six decades ago. I am delighted with the result and am looking forward to passengers being able to enjoy the distinctive sight and sounds of the 60-year-old machine.”

A GWR heavy freight locomotive will star at the North Norfolk Railway (NNR) for its Bank Holiday Steam...