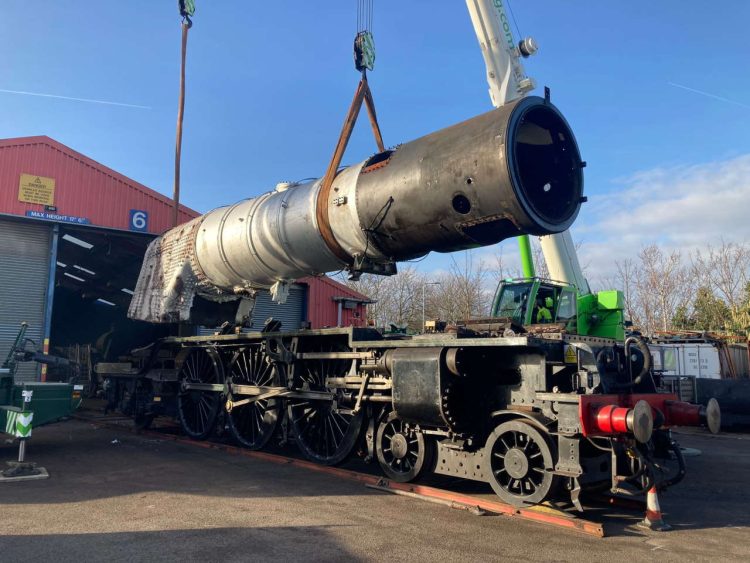 The A1 Steam Locomotive Trust has released an update on the overhaul of 60163 Tornado.

Immediately after the East Coast Gala on the 15th/16th January, the locomotive and tender were split, with the tender taken to Locomotive Maintenance Services in Loughborough.

Within three days, the tender tank had been removed, brake gear stripped and wheelsets prepared for removal.

The tender wheelsets have been sent to South Devon Railway Engineering, who have made a start on removing the old tyres and preparing for the new ones to be fitted.

The tender frames have been stripped further, removing pipework and corroded conduit and have been sent for shot blasting before reassembly can take place.

Work on the locomotive started at the Great Central Railway. The boiler has been washed out and the brick arch has been removed. Running gear and frames were steam cleaned before was moved by road to Locomotive Maintenance Services in late January.

Once at LMS, work started to prepare for the boiler to be lifted from the frames

The A1 Steam Locomotive Trust has confirmed that there has been a change to the original overhaul plan. The new plan will see Tornado’s current boiler transported to Meiningen in Germany to be serviced before returning to the UK.

The A1SLT says that they have had to take this step as the German industry has been significantly impacted by the Coronavirus pandemic, which has meant a six month delay in the construction of the two new boilers.

Whilst the trust could have delayed the completion of Tornado’s current overhaul by waiting for the new boiler and accepted the significant impact to the tour programme, they say that since there was a limited number of steamings through the pandemic, a refresh to the current boiler is a credible option.

The work will be completed quickly and re-fitting the current boiler will mean no need to modify cladding, fittings, etc.

The Trust says that their priority is to get Tornado back on the tracks to haul the programme of tours scheduled for 2022.

Chairman of the A1SLT, Steve Davies, explains more about Tornado in a recent update:

Some other components from Tornado have been dispatched to Darlington to be overhauled by A1SLT volunteer. A temporary workshop shelter at LMS has been completed. With the boiler lifted out of the way, the frames can be lifted off the wheels and these will be sent to South Devon Railway Engineering to be retyred, with the bogie and Cartazzi wheelsets being reprofiled.

A spokesperson for the A1 Steam Locomotive Trust said “While we could have delayed the completion of Tornado’s overhaul, waited for the new boiler and accepted significant impact to our programme, the boiler’s limited number of steamings through the pandemic mean that a refresh to the current boiler is a credible option and represents value for money. We are assured that the maintenance work will be completed quickly and re-fitting the current boiler will negate the requirement to modify cladding, crinolines, boiler fittings and so forth, thereby offering a more timely return to steam.”

“Our obvious priority is to get Tornado back on the tracks to take full advantage of the exciting programme of main line tours we have scheduled this year.”

If you would like to help The A1 Steam Locomotive Trust, you can join The Overhaul Club, more details on their website here.

An update on the challenges faced in overhauling the boiler of 60163 Tornado, and the novel solution to...