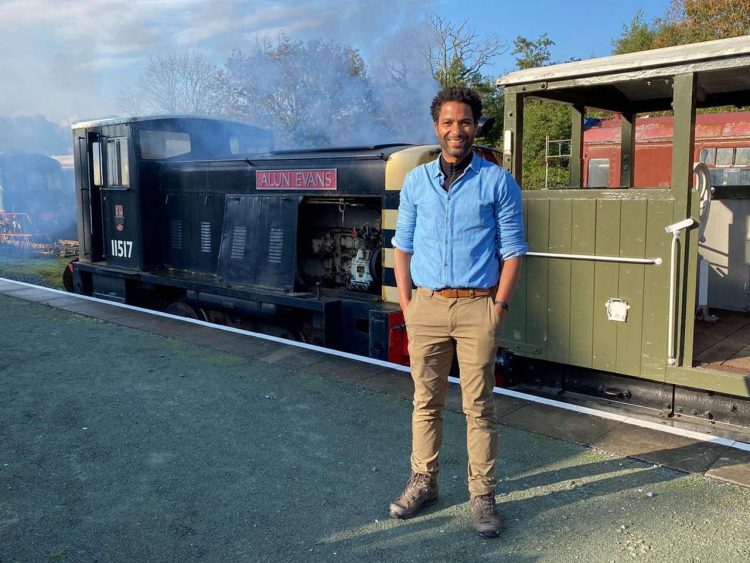 A new TV series called ‘The Wonders of the Border’ will feature Cambrian Heritage Railways (CHR), based in North Shropshire, as one of its chosen locations.

Cambrian Heritage Railways is a volunteer organisation located at Oswestry, Weston Wharf, and Llynclys. The series has been produced by ITV/Cymru Wales for ITV.

Attention will be focussed on CHR in episode five which is to be screened on ITV at 7.30 pm tonight (8th February). Details on The Wonders of the Border can be found at: http://www.itv.com/presscentre/ep1week2/wonders-border.

Sean Fletcher, a former Good Morning Britain, and Countryfile presenter, will take a nostalgic train ride along the heritage line as he follows Offa’s Dyke Path along the Wales-England border.

Trains will run on CHR on specific dates from April until September 2022. Booking is essential because of ongoing Covid restrictions, and online booking will soon be available on the railway’s website at http://www.Cambrianrailways.com.

The railway is also planning special excursion trains to link Oswestry with the Stonehouse Brewery and other attractions situated near to the newly built railway station at Weston Wharf.

An application to the Department for Transport for feasibility funding of up to £50,000 from the ‘Restoring Your Railway Ideas Fund’ has been successful. The feasibility studies will help to deliver a business case to reconnect the line from Gobowen to Park Hall Halt and onwards to Oswestry.

The original railway fell victim to the Beeching cuts, which saw the end of many uneconomic rural railways in the 1960s, although other parts of the Cambrian continued in use for freight until the 1980s. A local heritage society was formed in 1972 to keep alive the memories of when Oswestry was a major railway hub. CHR members will mark its 50th anniversary later this year.

CHR Chairman Rob Williams said: “We were delighted to welcome Sean and the film crew to the railway.

“Featuring Cambrian Heritage Railways on national TV is timely as we prepare for our grand opening in April. Our volunteers have been hard at work for several years to extend the railway a further two miles from Oswestry to Weston Wharf. It’s a fantastic achievement to restore a passenger railway line that hasn’t existed for over 50 years.” A remnant of the long-gone but not forgotten Cambrian Railways is set to reopen to passengers once more...