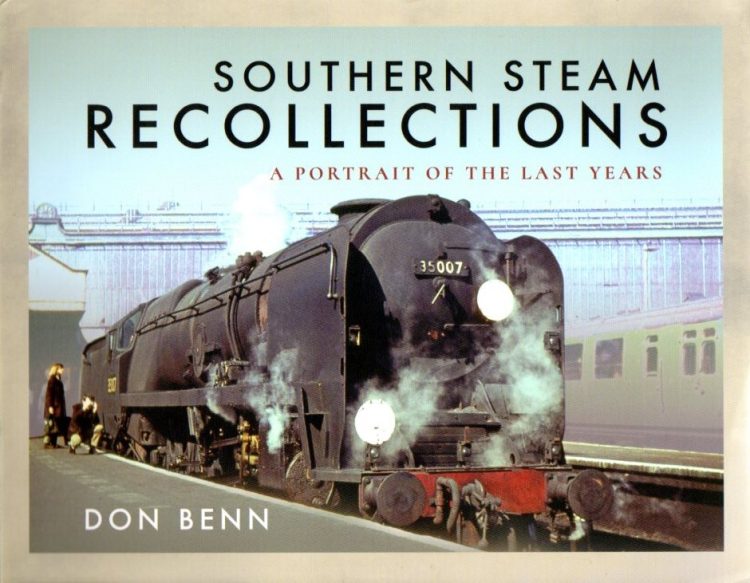 Southern Steam Recollections – A Portrait of the Last Years DEALS

Published in 2019, this book from publishers Pen & Sword Transport provides a collection of the author’s photographs of steam on the Southern Region in the 1960s.

Written by Don Benn, this hardback book is published in landscape format, measures around 197 mm x 245 mm, has 158 pages, and 150 black and white photographs. It has a published price of £25, but at the time of writing can be picked up on Amazon for £13.49. The quality of the finished product is well up to Pen & Sword’s usual standard.

There are three chapters split logically into the sections of the Southern Region, namely South Eastern, Central, and South Western, plus a Bibliography. There doesn’t seem to be a reason for the bibliography, as it is simply a list of six books about Southern Region locomotives, none of which are specifically referenced in the book.

The author started taking photographs of steam locomotives and steam-hauled trains on the Southern in 1960 and continued until the end of steam in July 1967. Railway subjects are ideally suited to landscape format as used for this book, but unfortunately, over-enlarging photographs to fit the page has resulted in some of the content losing definition or simply being out of focus.

A book about the Southern Region will inevitably suffer from the lack of variety to be found on the other regions, but even so, there is an undue balance in the classes shown. Of the 150 photographs in the book, 90 of them show H class 0-4-4 tanks, 2-6-0s of classes N, U, and Bulleid Pacifics, and Standard Class 4 2-6-4 tanks.

The quality of many of the photographs isn’t good enough for reproduction. Many show the standard three-quarters view favoured by railway photographers, but suffer from being taken at too low a shutter speed, resulting in blurred front numbers.

Subjects that have always attracted railway photographers have been special trains with unusual locomotives. On the left, the author has captured one such special, hauled by a Midland Region Black 5.

Although a great proportion of photographs in the book are of ubiquitous Bulleid Pacifics, these two photographs provide a pleasant branch line interlude.

These scenes sum up the Southern in the West Country, with a Bulleid Pacific waiting to depart from Ilfracombe and a Beattie well tank at Wadebridge, both photographed in 1962.

The book is available to purchase from Amazon and from Pen & Sword (RailAdvent Plus members get 25% off books on the Pen and Sword website. Please click here for more information).

Southern Steam Recollections – A Portrait of the Last Years

Could find a place on the bookshelf of aficionados of the last years of Southern steam. For the cover price, prospective purchasers would be looking for better-quality photographs than are included here.

Southern Steam Recollections – A Portrait of the Last Years DEALS This book is a selection of articles from the Railway Magazine archives about the LNWR around the start...