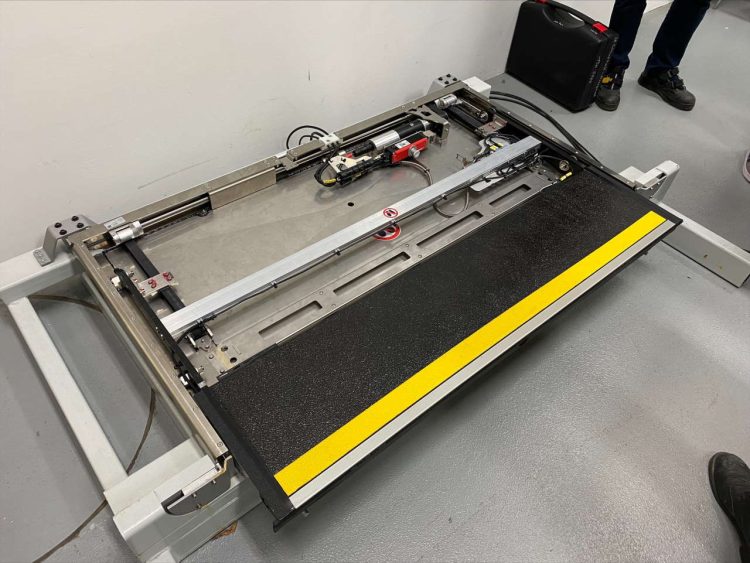 The Tyne and Wear Metro has revealed how the automatic sliding step on Metro’s new trains steps will transform accessibility.

The sliding step is a key feature of the new £362m Metro fleet and eliminates the gap between the train and the platform edge.

They will be located at every door of the new trains, making boarding easier for customers with wheelchairs and people with children’s buggies, luggage, or bicycles.

Every time a train pulls into a station, the sliding step will automatically deploy from beneath the door sill, closing the gap between the platform. It automatically retracts before the doors close and the train pulls away.

Both the sliding step and the doors are being made by a company called Bode Die Tur at their factory at Kassel in Hessen, Germany. They specialise in the development and production of electronic doors and boarding.

Metro’s operator, Nexus, and Stadler, the trains’ Swiss train builder, recently conducted an official inspection at the Bode factory to test the sliding step and doors before they go into full production.

New Fleet Project Manager at Nexus, Sarah McManus, said: “It was fantastic to see the new automatic sliding step in operation. This piece of technology is a key feature of the new Metro train fleet that will transform accessibility for thousands of customers.

“The sliding step works by providing seamless boarding from platform to train. It removes the gap between the train and the edges of the Metro platform when it deploys.

“We got the chance to inspect the sliding step and the new train doors on what is called a first article inspection of the production line over in Germany. Bode have an excellent track record and will be supplying the boarding system to Stadler as final assembly of our new trains progresses.

“We are delighted to share the first images of the Metro’s sliding step and we looking forward to seeing it in operation again when the first new train arrives in our region at the end of the year.”

Stadler is supplying 46 new Metro trains, with the first unit set to arrive at the end of this year. They are currently fitting the main interior components as part of the final assembly process. Works include the installation of wheels, seats, equipment cases, piping, wiring, flooring, windows, and other internal furnishings, and are taking place at Stadler’s factory at St. Magrethen in Switzerland.

The first new train will be delivered at the end of this year for testing and driver training, with a view to it entering customer service in summer 2023. They will be 15 times more reliable, cut energy consumption by 30%, and have modern features including charging points, air conditioning, and a step-change in accessibility. As part of the project, Stadler is building a new £70m Metro depot at Gosforth. Production of the Class 93 locomotive fleet being built by Stadler for Rail Operations UK has started with...