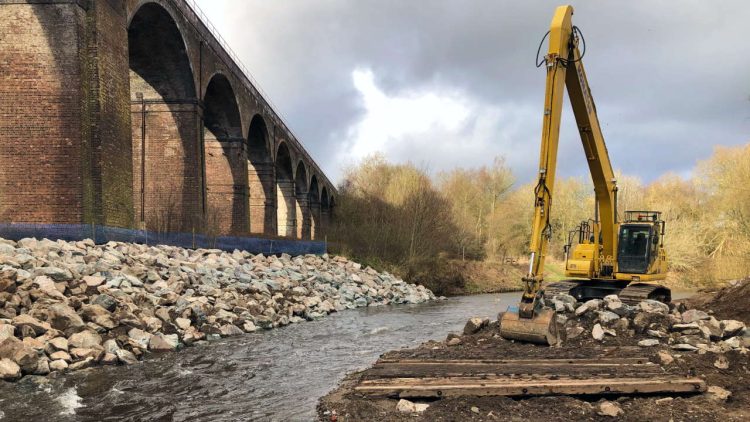 Urgent anti-erosion work being carried out around the foundations of Reddish Vale railway viaduct in Greater Manchester has restarted after three major storms forced work to be temporarily suspended.

The viaduct was built in 1875 and is a Grade II listed structure in the Reddish Vale area of Stockport.

It crosses the River Tame and the Tame Valley and is used by train services on the Hope Valley line between Manchester and Sheffield.

A routine inspection by Network Rail discovered that fast-flowing water from the River Tame has caused the riverbed to wash away.

To rectify this, approximately 5,500 tonnes of rock armour, which are large boulders, is being laid at the foundations of the viaduct.

The anti-erosion work started in January, and inspections during the first few weeks more areas were found that needed protection, which means the project will take slightly longer than planned and run into March.

Work had to stop for several days after storms Dudley, Eunice, and Franklin caused the River Tame to swell to unsafe levels.

Essential repairs have now restarted to protect the 147-year-old structure and to keep trains running safely on the Hope Valley line above for decades to come.

Parents and guardians at nearby schools are being advised of the continued presence of construction vehicles along Lambeth Road and Reddish Vale Road.

However, passengers are not being affected by the upgrade as trains on the Hope Valley line between Greater Manchester, the Peak District, and Sheffield are running as normal.

Network Rail is committed to carrying out the work so it doesn’t harm the river or its wildlife, and specialists from the Environment Agency and ecological consultants are overseeing the project.

Chris Pye, Network Rail’s North West infrastructure director, said: “While we tried our best to keep working during these three storms, we had to briefly stop work at Reddish Vale for safety reasons.

“The recent weather shows exactly why it’s so important for us to shore up the foundations of this iconic Victorian-built structure and protect it from further erosion. I would like to thank local people and businesses for their patience and understanding while the work takes place.”

Chris Jackson, regional director at Northern, said: “Improvements like these are essential in delivering our long-term strategy to create a better railway for the North and is a great example of the rail industry working together to improve the network.

“We are sorry for any disruption while the work takes place and our customers can be assured that both Northern and Network Rail will do everything possible to keep them on the move.”

Andrew Gwynne, MP for Denton and Reddish, said: “This is really urgent work, and I’m very pleased that Network Rail are taking action before any further erosion occurs.

“The Reddish Vale viaduct is not only an iconic piece of architecture for both Reddish and Denton but also a vital transport and rail link. It’s important that we protect it for generations to come.”

Cllr Sheila Bailey, the cabinet member for Sustainable Stockport, said: “Stockport Council has been incredibly supportive of the work taking place on Reddish Vale viaduct to ensure it is protected from the effects of erosion caused by the River Tame.

“We have been liaising with all parties for the best outcome for users of the park and mitigation has been agreed for any loss of habitats or trees in the area while the vital works have been taking place.”