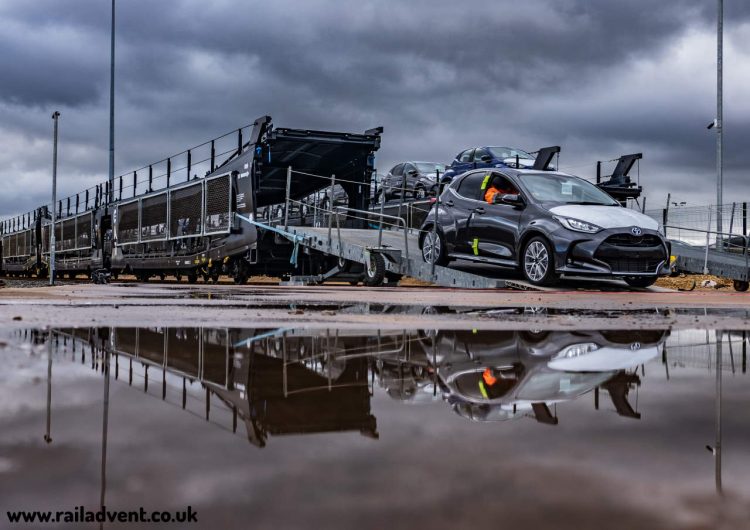 Yesterday, DB Cargo UK invited RailAdvent to their Toton Depot to have a look at their new £2.6m car transfer facility.

The new international service from DB Cargo UK, Groupe Cat and Toyota, is to run twice a week initially and follows on from successful trials.

Roger Neary, DB Cargo, said that Toyota was the first car manufacturer to use the Channel Tunnel in a number of years.

Steve Reynolds, MD at Groupe Cat, confirmed that 250 cars were being unloaded and loaded on yesterday’s service. Those unloaded yesterday were Toyota Aygo, Yaris and Yaris+ vehicles, whilst the Hybrid Toyota Corrollas, which are manufactured at Toyota’s Derby Plant, are being dispatched today (23rd February) to Valenciennes in Northern France. This is to make full utilisation of the new services.

It takes 25 hours to get the cars from Toton to Valenciennes and then cars are taken by rail to Kolin, which takes around 60 hours.

The new vehicle storage compound at Toton is around 4.25 acres in size. Work started in September 2021 and was finished earlier this month. The compound features CCTV and lighting for security, with security fencing also featuring.

The sidings also needed to be relaid next to the storage compound to make sure the wagons were straight to make for easy and safe unloading and loading of cars.

Steve Reynoulds also confirmed that the two services a week would be increasing to three by Q2 2022.

DB Cargo UK are the traction partner for Groupe Cat and have also agreed a long term lease for the Toton site.

Roger also confirmed that each train will take the equivalent of 29 road transporters, which will reduce CO2 and congestion on the UK’s roads.

Road transporters are still used, but will be only used to take the cars to and from the storage compound – this meant that 1100 metres of road had to be widened or constructed to accommodate the trucks.

A big thank you to DB Cargo UK for inviting us to Toton, more photos of our visit will be shared in due course on social media.