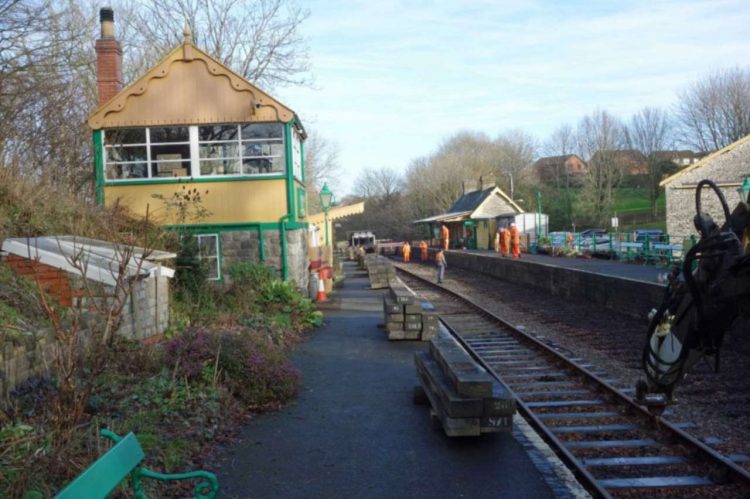 The track gang of the Somerset & Dorset Railway Heritage Trust at Midsomer Norton has had a busy start to 2022.

On the first two Sundays of the year, they removed all the badly worn Down line rail in the station area of Midsomer Norton South station, along with all the sleepers.

On the first Sunday, 2nd January, they de-keyed four track panels, removed the fish plates, and lifted lengths of rail lifted out of the sleepers. They cut them into 30ft lengths in-situ and then moved them with the RRV (Road Rail Vehicle) to Grampus wagons to await reassembly later in the month.

On the second Sunday, 9th January, a near-record number of volunteers turned out to help. That enabled all the sleepers to be lifted out using a special boom on the RRV.

The sleepers were initially placed on the Down platform where the chairs were removed by a separate team. They were then passed through to the yard and stacked for later use.

After a well-earned pause for lunch, the main activity in the afternoon of 9th January was to start removing the old ballast that had been exposed after lifting out all the rail and sleepers. To do this involved a rather tricky task of fitting a hydraulic bucket scoop to the RRV. That was then used to gather up as much material as possible and empty it into a Dogfish wagon located on the Up line.

As well as using the scoop, volunteers put in a lot of effort with shovels until fading light brought work to a close. That was the signal for everyone to retire to the mess van to enjoy a well-earned mug of tea.

On the next two weekends, Saturday and Sunday 15th/16th and 22nd/23rd January, volunteers will be on-site for both days with a view to completing the work. The Somerset and Dorset Railway Heritage Trust has launched an appeal to raise £10,500 to refurbish one of...