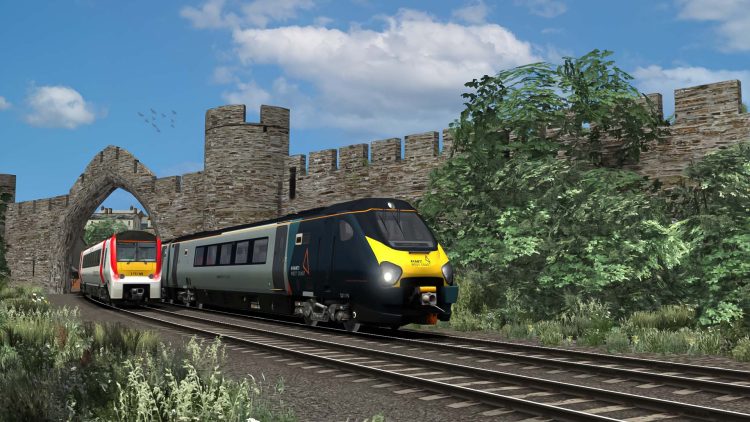 Dovetail Games has announced that it is releasing a new edition of the scenic North Wales Coast Line from Crewe to Holyhead with a version for Avanti West Coast and Transport for Wales.

The new version is set for release on 20th January.

Players who already own both of the existing Arriva and Virgin Trains branded routes, North Wales Coastal: Crewe – Llandudno and North Wales Coastal Route Extension: Crewe – Holyhead, will receive this new version in their library containing Avanti West Coast and Transport for Wales.

The original routes and branding will not disappear, and will still exist within players’ collections.

The history of the real-life line goes back to the Act of Union in 1801 when Ireland became part of the United Kingdom. Since then there have been efforts to improve transport links between Britain and Ireland. At that time horse-drawn transport and sailing ships were the norm. Ships for Dublin would arrive at Dun Laoghaire (then known as Kingstown) and often departed from Holyhead in Anglesey, which was the shortest trip for boats to take.

Things improved the arrival of railways in the 1840s when two railway companies formed the basis of what is today the North Wales Coast Line. The first was the Chester and Crewe Railway in 1840, followed a few years later by the Chester and Holyhead Railway, which was proposed by George Stephenson because the coastal route along the Irish Sea would be best for hauling mail traffic to and from Ireland.

By August 1848 the “Irish Mail” would regularly work from London to Crewe, along the West Coast Main Line, before continuing to Holyhead and finally Ireland. By this time, the original Chester and Crewe Railway had been absorbed by the Grand Junction Railway, and the Chester and Holyhead Railway followed suit in 1859 when it became part of the London and North Western Railway (LNWR).

With the LNWR in control of the West Coast Main Line and the line to Holyhead, they realised that there was an opportunity for tourist traffic. To take advantage, they put trains on to serve seaside resorts such as Rhyl, Colwyn Bay, and Llandudno, ensuring the line’s popularity.

When the “Big Four” was formed in 1923, the LNWR network became part of the London, Midland & Scottish Railway and another popular era ensued. However, the arrival of British Railways saw special trains cut from the timetable, and the North Wales Coast Line was relegated to a mainly freight line. Today though, freight is less common, and passenger traffic has seen a revival, with local and long-distance trains operated by Transport for Wales and Avanti West Coast serving the line dozens of times a day.