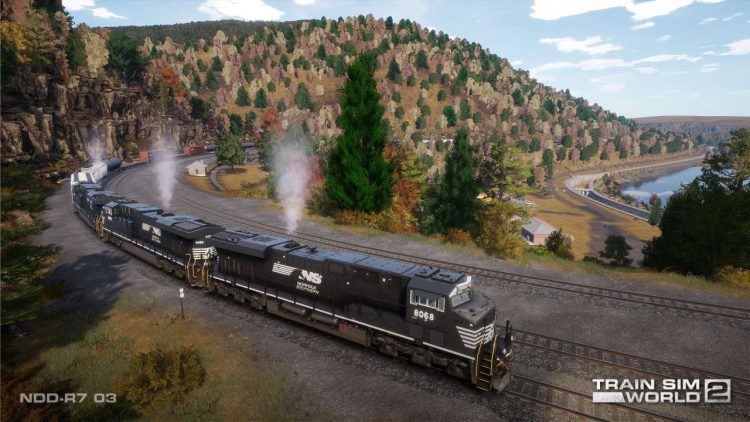 A new route soon to be released by Dovetail for Train Sim World 2 (TSW 2) and is one of America’s most legendary and dramatic railroad landmarks, Norfolk Southern’s (NS) Horseshoe Curve route.

Over 150 years after it was built the Horseshoe Curve route is still a busy Norfolk Southern rail artery.

TSW 2’s Horseshoe Curve route, which is known today as Norfolk Southern’s Pittsburgh Line, will re-create NS’s crossing of the rugged Alleghenies and give players the opportunity to haul a variety of freights ranging from priority inter-modals to ponderous coal behind high-horsepower NS diesels.

Developed by Skyhook Games for TSW 2, the route extends 40 route miles from the railroad town of Altoona and the sprawling Juniata Shops to Johnstown, Pennsylvania.

The line climbs over the Allegheny Mountains and represents the railroad as it was in 2018.

The route also includes part of Norfolk Southern’s steep South Fork Secondary line extending 15 miles from South Fork to a coal mine near Windber, Pennsylvania, and with climbs of up to 3 percent.

A full range of modern freight equipment will also be provided to replicate the diverse traffic flow over the route.

In total, there will be a selection of four training tutorials, five scenarios, and a variety of timetabled services.

To climb the eastern slope of the Alleghenies, the Pennsylvania Railroad faced the daunting task of ascending nearly 1,000-feet between Altoona and Gallitzin, Pennsylvania.

To do so required a tortuous and twisting climb with a 1.85 percent ruling grade, and that was achieved only by the building of the 3,612-foot-long Allegheny Tunnel at the summit and the great horseshoe-shaped curve at Kittanning Point, which itself carries the line from an elevation of 1,473 feet on its east end to 1,706-feet on its west side.

Horseshoe Curve and the Allegheny crossing from Altoona on the east to Johnstown, Pennsylvania on the west are part of the Pennsylvania’s Pittsburgh Division and are one of America’s busiest and most critical railroad arteries.

Besides Horseshoe Curve, the route has other classic and memorable locations, including the Gallitzin, Allegheny, and New Portage Tunnels, remote MG Tower, the steep eastbound “Slide,” key coal feeder lines at Cresson and South Fork, and the sprawling yards and Juniata shops at Altoona.

All screenshots in this article are by Dovetail Game’s Gary Dolzall. Dovetail Games and Rivet Games has announced that the Arosa Linie: Chur - Arosa is coming to Train...