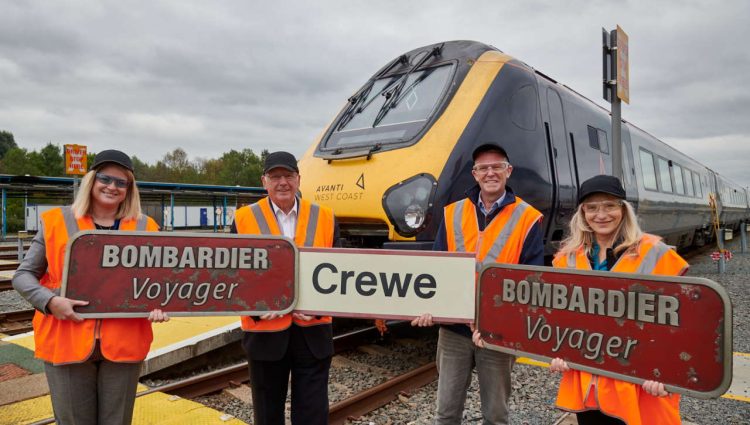 Music producer Pete Waterman, President of the Railway Benefit Fund has issued a thank-you message to Avanti West Coast and Alstom for supporting a charity auction of railway memorabilia.

The auction was to support the Railway Benefit Fund, which had set a target of £40,000 to be raised by its Christmas Appeal. The final sum of £3,877 raised from the auction went a long way to reaching that target.

The Railway Benefit Fund is a charity that solely supports railway people and their families. Founded in 1858, and now based in Crewe, they offer bespoke care and advice to railway families to help them through tough times. A Pendolino was named after the charity in April 2021 to mark the start of their yearly Railway Family Week.

Among the lots were two nameplates previously carried by one of the Avanti’s Super Voyager fleet, set number 221142, and a pair of Crewe station signs, which were quickly snapped up by enthusiasts.

The 2023 Railway Benefit Fund Calendar could feature your photo

For many years, the station signs would have been a familiar sight to rail travellers passing through or changing at Crewe.

Record producer and president of Railway Benefit Fund, Pete Waterman said: “A very special thank you to all the bidders and especially the winners whose generosity means we’ve raised an amazing £3,500.

“Thanks too to Avanti West Coast and Alstom. It’s perfect timing in the run-up to Christmas when we need support the most.”

Gus Dunster, Executive Director Operations and Safety at Avanti West Coast, added: “Its great we’ve been able to find these items a good home and in the process raise some much needed funds for a charity so close to our hearts.”

Peter Broadley, Managing Director, Services for Alstom, said: “We knew the auction would be popular, but it’s exceeded all our expectations, and for a great cause too. Well done to all the bidders and to everyone involved.” Avanti West Coast is supporting a project which highlights the record-breaking Dick, Kerr Ladies, which was created by...