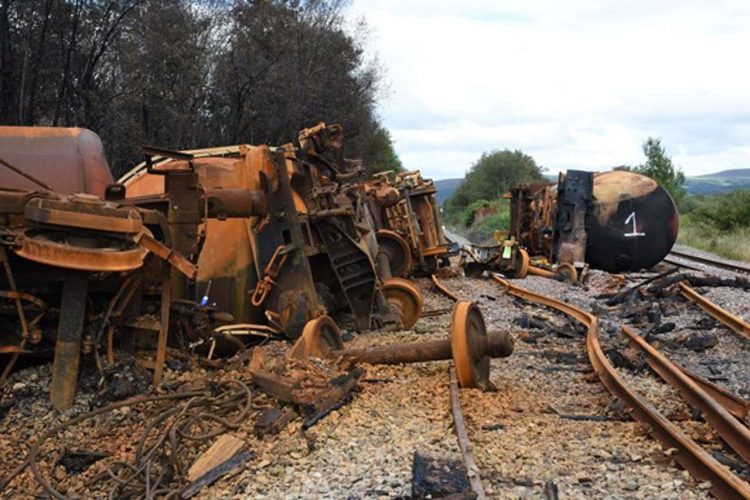 The Rail Accident Investigation Branch has today, 13 January 2022, released its report into the derailment and fire involving a tanker train at Llangennech in Carmarthenshire on 26 August 2020.

The derailment and consequent damage to the wagons resulted in a significant fuel spillage followed by a major fire. The driver was unhurt and reported the accident to the signaller.

Subsequent examination of the site found that the third to 12th wagons in the train had derailed, and around 446,000 litres of fuel had escaped.

The spilled fuel caused major damage to the environment, as the area is both a site of special scientific interest (SSSI) and a special area of conservation (SAC), including cockle beds, natural tidal mudflats, and wetlands.

The derailment occurred because one set of wheels on the third wagon had stopped rotating and became locked during the journey. The problem probably arose because of a defect in the wagon’s braking system arising from deficiencies in the design and maintenance of components.

The locked wheel sliding along the railhead caused damage to the profile of the wheel treads, which meant that the wheels were unable to safely negotiate Morlais Junction near Llangennech, damaging the pointwork and causing the wagon to derail. The following wagons derailed on the damaged track, resulting in some of the derailed tank wagons being ruptured and the spilling fuel ignited.

RAIB has made nine recommendations covering a review of the actions taken by the wagons’ owner following this and previous accidents, and improvements to the maintenance procedures at the locations where the wagons involved in the accident are maintained and overhauled.

A recommendation has been made that the organisations who carry out surveillance and certification of entities in charge of maintenance of rail freight vehicles should review their processes.

A further two recommendations have been made. The first is that management of wagon maintenance on the railways in Great Britain should be improved. The second is that the technology and systems used to alert traincrew, signallers, and railway control offices to wagon defects that may lead to derailment should be reviewed.

The final recommendation is for a review of the arrangements for regulatory oversight of entities in charge of maintenance and certification bodies that are not based in the UK.

“Trains carrying dangerous goods play an important role in the UK economy, but the risks which their operation presents must be adequately controlled. The consequences when things go wrong can be disastrous, as we saw at Llangennech in August 2020. Thankfully no one was hurt, but people were evacuated from their homes and the damage, both to the environment and to people’s livelihoods, will take years to put right. The accident also closed the railway line for more than six months whilst the railway was being rebuilt and engineers worked to minimise the damage to the local environment.

“The rail industry’s approach to the safe maintenance of freight wagons needs to improve. In this investigation we found that there were inadequate maintenance practices, and a failure to appreciate the importance of the correct fastening of the various components of the tanks wagons’ braking system. This is not the first time that we have investigated an accident where RAIB has identified serious issues with the maintenance of a freight train. Over the last decade we have identified deficient wagon maintenance as a factor in more than ten investigations, including maladjusted suspension, undetected frame twist and worn bogie pivot liners.

“In our report we have recommended a review of the technology and systems currently being used in the UK and other European countries to identify how improvements can be made to the railway’s ability to detect a wagon defect that may lead to a derailment, such as dragging brakes. The smarter use of trackside technology to warn the railway that a train is endangering its infrastructure is a familiar RAIB theme; some of our previous investigations have urged the greater use of wheel impact load detection data to identify uneven wheel loads. RAIB would like to see more work in this area focused on how trackside systems could be used to reliably detect dragging brakes, but also, how such data can be used in an intelligent way to benefit both real-time operations and fleet maintenance management.

“The majority of our recommendations following our extensive investigation of the derailment at Llangennech relate to improved maintenance processes for freight wagons. The widest-ranging of these urges the freight sector, in conjunction with Network Rail, to develop a comprehensive programme of measures designed to promote the improvement of freight wagon maintenance in the UK. This is intended to be a collaborative effort, which is appropriate given the potential benefits of better information sharing across the sector.

“I would like to stress the importance of getting this right. It’s time that freight wagon maintenance practices were subject to careful examination and for the industry to think through the way that it can best deliver on its legal and moral obligation to present wagons that are fit to operate through the nation’s towns and cities. The prize for getting this right is improved safety, better reliability, and compliance with the freight sector’s legal obligations – and all at a reasonable cost.

“Since RAIB has been concerned about the quality of freight wagon maintenance for many years, I welcome the actions that ORR has taken to reinforce its supervision of entities in charge of maintenance. This will provide improved visibility of maintainers’ important work and verify the extent to which the important role of ECMs is properly understood and applied across the UK freight sector, and the adequacy of surveillance undertaken by certification bodies (whether based in the UK or in the EU).

“I have been struck by the extent to which the safe condition of freight wagons is critically dependent on people being given the tools and training they need to do a difficult job, very often in dark, wet, and cold working conditions. So, I urge freight operators and maintainers to think carefully about the people who do the hands-on work, and the things that could be done to develop the capability of the workforce.”