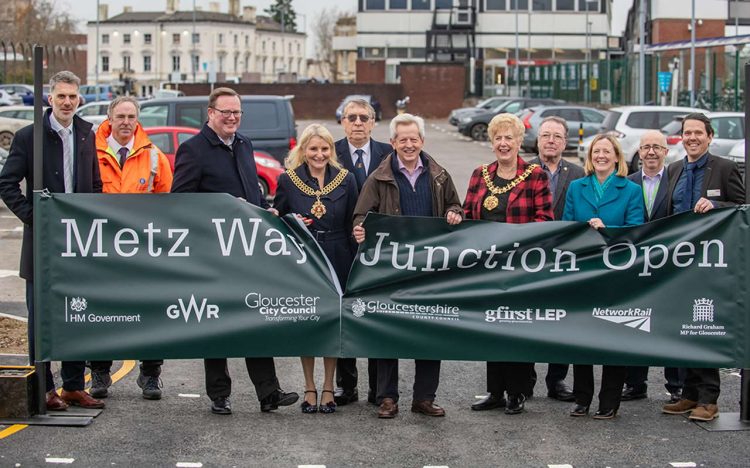 The regeneration of Gloucester station has moved a step closer after Gloucestershire County Council constructed an exit from the main station car park onto the A430 Metz Way.

The new exit will allow better bus and rail integration at the station. Work will start in January to upgrade the Bruton Way junction to improve the pedestrian route between the station and the city centre, and to make the underpass under the station step-free.

Gloucester station is served by Great Western Railway, CrossCountry, and Transport for Wales.

“It’s also vital to the next stage of improvements at our railway station in the New Year, at the station building, forecourt, original entrance, Bruton Way and underpass. It’s a series of mini projects and congratulate all involved on success so far.”

Cllr Richard Cook, Leader of Gloucester City Council, said “The opening of this new Metz Way entrance to Gloucester Railway Station is an important step in the overall project. It marks progress in the project as we look to make improvements to the railway station in Gloucester, including the underpass to Great Western Road.

“The opening of this entrance will allow work to begin at the Bruton Way junction, which will help to create a better link between the station and the city centre.”

Mark Hawthorne MBE, Leader of Gloucestershire County Councillor, said “I am delighted to see this new entrance from Metz Way has been completed. The new access into the railway station will provide easier connections with other areas of the city and help to reduce congestion in the city centre. It is an important step in the wider improvements of the railway station.”

Mark Hopwood, GWR Managing Director, said “We are delighted to see work on this next phase has been completed. Working together we have been able to build on the previous investment and pave the way for further improvements. This would not have happened without the combined efforts of local government, national government, the rail industry, and the local enterprise partnership.

“This is a perfect example of how working collaboratively can support the communities we serve to thrive.”

Daniel Collins, Network Rail Western Senior Project Sponsor, said “We are proud to be working with Gloucestershire County Council, Great Western Railway, and other key partners on this important scheme.

“Effective transport links – whether passengers are travelling for work, leisure or needing to visit the Gloucestershire Royal Hospital – are essential. And we look forward to helping GWR develop and deliver the future plans for the station.”

Ruth Dooley, Chair of GFirst Local Enterprise Partnership, said “It’s great to see the first phase of the Gloucester railway station scheme now complete. GFirst LEP successfully bid for £4.3million for this project from the Government’s Growth Deal fund. We are looking forward to seeing the next important phases commence to the underpass and forecourt.

“Gloucester’s residents and all its visitors will hugely benefit from the regeneration of the railway station. The project is a real enabler for growth, follows in the footsteps of another LEP funded project, The Transport Hub, and will complement all the wider exciting projects taking shape in the heart of the city”. Transport for Wales in partnership with Alt Labs has developed an innovation accelerator programme, Lab by TfW,