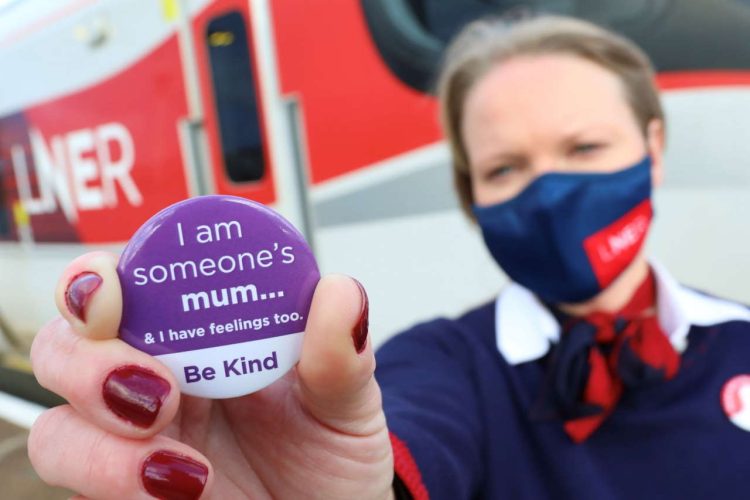 The campaign began as an LNER initiative, and now includes partners from the wider rail industry. Members of the station and onboard staff will wear a range of badges to encourage people to be kind when travelling by train.

The badges feature phrases such as “I am someone’s mum” and “I am someone’s brother”. They have been designed to humanise the wearer and to remind those they interact with that they are more than ‘just a uniform’.

LNER staff across the East Coast route began to wear the Be Kind badges in December and will continue wearing them into the new year so that the team can assess the impact of the badges and understand how successful they have been in reducing anti-social behaviour.

To help the campaign test several different approaches, as well as badge designs that focus on a wearer’s family relationships, the team has produced a range of badges illustrated with animals, such as a lion alongside the words “please don’t roar at me”.

Claire Ansley, Customer Experience Director at LNER, said: “Having seen the impact that anti-social and rude behaviour can have on our customers and colleagues, it was important that we took action and formed LNER’s Be Kind campaign. As a first step, our new range of badges are a simple way for us to support our station and onboard teams whilst out and about and we’re already seeing that they are generating a lot of positive conversations with customers.”

Besides the trial of Be Kind badges, LNER is working with other train companies to explore further ways to encourage more kindness on the railway. Over the Easter weekend a number of upgrades were made at Hull Paragon station that will improve the...

LNER urges passengers to book ahead with 103,000 bookings made for Easter break