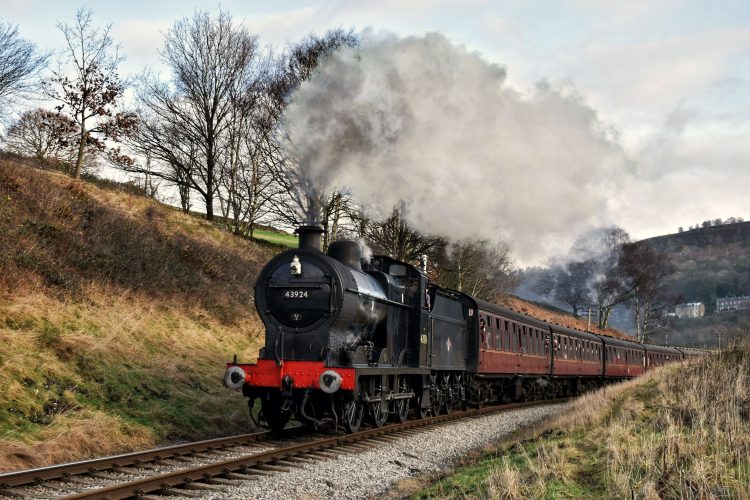 Popular Midland Railway 4F 0-6-0 No. 43924 has come to the end of its active service on the Keighley and Worth Valley (KWVR) Railway.

The loco had been running with a 6-month extension of its boiler certificate, but that expired on New Year’s Eve 2021.

Its last runs were a week of hauling six coaches on the KWVR’s ‘Mince Pie Specials’, even managing to run with two superheaters blocked off.

The loco is planned to be put on display in the Exhibition Shed at Oxenhope, but will have a wider audience as it features in the movie Railway Children Return, which was filmed in the summer of 2021 and set for release in summer this year. It has also featured in other films, including Testament of Youth and Swallows & Amazons.

Built at the Midland Railway works at Derby, the loco entered service in 1920 as No. 3924 coupled to a 3,500 gallon tender of Midland Railway pattern with a curved top and coal rails. Under British Railways it became 43924. In 1951 it was fitted with a Fowler tender that it still has.

Its final years were spent working in the Gloucester area until being withdrawn in June 1965 and sold for scrap to Woodham Bros. of Barry in South Wales.

A small band of enthusiasts gained permission to purchase and remove the engine from Woodham’s scrapyard, where it became the first of over 200 locomotives to be rescued from this single scrapyard.

It arrived at Haworth on the KWVR in the summer of 1970 where the boiler was completely re-tubed and non-ferrous fittings were replaced before it could re-enter traffic. After a successful steam test, it started its preservation career in 1974 as LMS no. 3924.

The loco remained in service until 20th December 1987 but it was another 23 years before the 4F steamed again, returning to service after a thorough overhaul on 2nd July 2011 in the livery carried in its final years with BR.

Since then, 43924 has been a regular and popular performer, including time away from the KWVR visiting Bombardier at Derby to celebrate 175 years of train manufacture in the city, and galas at the Severn Valley and West Somerset Railway.