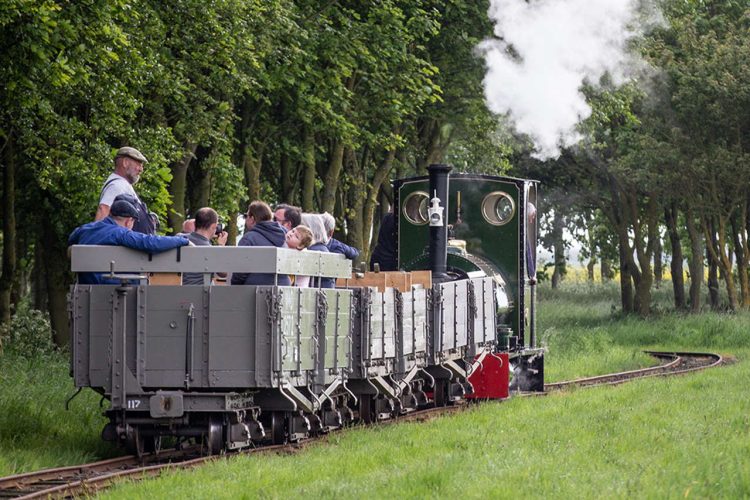 After the Lincolnshire Coast Light Railway ran its last trains of the season, the ‘bogie men’ appear.

These are volunteers who work on the 22 wagon and carriage bogies that the Lincolnshire Coast Light Railway has for its five carriages and three bogie wagons.

The bogies are of a standard design for the World War I War Department’s light railway stock but with variations.

Volunteer Peter Balderston, one of the railway’s ‘bogie men’ says “Our basic requirement is for 16 bogies for eight carriages and wagons so with 22 we have more than the bare minimum. The spares are very valuable to enable us to switch bogies around. Bogies in good condition are a key element of rail safety as they are crucial to keeping the trains on the tracks and making sure they can stop.

“Besides the bogies required for wagons and carriages, two more are required for the rail bolster which we use to move rails around the system for track repair. So we require 18 bogies out of the total of 22, which means that four bogies are spare. The spare bogies are now being used to select the best parts to keep the rest of the fleet running.”

“Generally we fit one braked bogie to each vehicle, the exception is our WWI Class D wagon 2572 adapted for passenger use with a Lottery Fund grant which has a representative (for 1918) brake bogie on each end.”

During WWI, all bogies supplied had hand brakes that stick up at one end, although some of these were removed when they were used for agricultural and industrial use after the war, so that on some lines, wagons ran with one braked bogie and one un-braked. The LCLR has a selection of braked and un-braked bogies mainly coming from the Nocton Estate Light Railway, one of Lincolnshire’s ‘potato railways’.

To bring the LCLR’s trains into the modern era, some bogies are now air braked which enables the train to be stopped by applying the brakes on all vehicles from the loco. Before the introduction of air braking, stopping the train depended on whether there was someone on the train winding on the brakes by hand, otherwise they relied on the loco brakes alone. Nowadays, air brakes are a basic requirement to run public passenger trains.

The air-braked bogies are therefore essential for safe use of passenger vehicles, so the four air brake bogies and their companion un-braked ones are vital to maintain the passenger service.

The last valves were made in the mid 1970, and hence are very difficult to find, and spare parts are unavailable. It is thought that some newer valves can be adapted but a modern replacement has yet to be confirmed and successfully tested. Over the years many volunteers have put in a lot of work to improve the air-braking system, and three of the four air braked bogies have had extensive work done on them, including one for the Nocton coach that was recently finished. An un-braked bogie for this coach is now being constructed.

As Peter Balderston says, “It is important to state that the bogies are as crucial as the locos to maintain the service. We are getting much better at rebuilding them by improving the design. After bogie No. 4 is done it will be time to go back to No. 1 and rework some parts to the newer design.

“As our bogies are around 100 years old, they need quite major attention to keep them serviceable and to allow individual bogies to be serviced, we need spare bogies that we can swap in and out from under the carriages. Regarding wear and tear we need to replace stuff that has worn out over 102 years. At the moment the LCLR is buying six sets of top and bottom centre bearings to replace ones worn out over the years.

“When switching bogies, you jack up the coach body, wheel one bogie out and wheel the new set in but you have to be very careful that the frame is properly seated on the new bogie. “

The Nocton ‘Queen Mary’ coach was built on the Nocton Estate Light Railway to transport the guns for a day’s shooting on the estate, where much of the stock of the LCLR came from. The coach was built onto a steel-framed Class D bogie wagon and is being restored, without glass in the windows, to provide another open air coach for the LCLR train service. It will require one air braked and one un-braked bogie.

Almost anyone can be a ‘Bogie Man’ at the LCLR. There is a variety of work for volunteers ranging from removing rust, sanding down, and painting to changing wheel sets, replacing the bogie centres, and designing and fitting new air brakes. To find out about volunteering at the LCLR just click on the link on the railway’s homepage www.lclr.co.uk