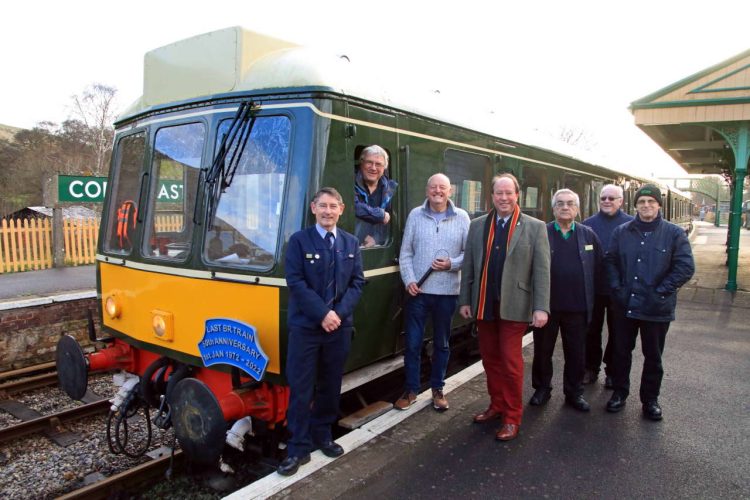 Saturday the 1st of January 2022 saw Bob Richards on the platform at Corfe Castle station, greeting train driver Peter Frost who has been a committed Swanage Railway volunteer for 45 years and who was a teenager on that very last British Rail train 50 years previous.

Bob Richards, said: “It was really great to see Peter driving the special train into Corfe Castle on the 50th anniversary of the last British Rail train because I remember him as a child growing up in the village and being very keen on the branch line and its trains.

“It doesn’t seem like 50 years ago since British Rail closed the line to Swanage. We thought the line would be saved and come back to life but when the tracks were lifted in seven weeks during the summer of 1972 everyone thought that was the end.

“It is incredible what Peter and the other dedicated Swanage Railway volunteers have achieved over the past 45 years in bringing the line back from the dead – relaying the tracks, building new stations, developing in the infrastructure to maintain the railway and link up with the national railway network.

“You have to admire the grit and determination of several generations of Swanage Railway volunteers in not taking no for an answer and for battling on, and winning, against the odds,” added Bob who started as a teenage junior porter at Corfe Castle station in 1962 and retired from Network Rail at Wareham station signal box in 2007.

Retired engineer, Peter Frost, grew up in Corfe Castle and now lives in Swanage and was the driver of the heritage British Railways 1960-built three-carriage Class 117 diesel multiple unit which formed the special service between Norden, Corfe Castle and Swanage on Saturday the 1st of January, 2022. The commemorative diesel service also ran on the 2nd and 3rd of January, 2022.

Peter Frost, said: “It was great to drive the special train into Corfe Castle station and see Bob Richards waiting on the platform like he used to when a signalman there 50 years ago. It was a brilliant day that I will always remember.

“I have very happy memories of Bob who was very kind to me as a youngster when I was growing up in Corfe Castle because he could see I was fascinated by the railway.

“When I rode on the last train as a 13 year old, I never imagined the railway would be rebuilt and that I would be lucky enough to be a volunteer on it for 45 years. I’ve enjoyed every minute of it and the work is incredible rewarding with great people,” added Peter who who became a Swanage Railway volunteer driver in the early 1980s.

On the evening of Saturday the 1st of January, 1972, saw the very last British Rail train run from Wareham to Corfe Castle and Swanage on the 10 mile branch line which then went on to close on Monday the 3rd of January 1972.

To mark the commemorative event of the 50th anniversary of the branch lines closure, a special heritage Edmondson card ticket has been made for Swanage Railway passengers travelling between the 1st and 3rd of January 2022.

Originally opened during May 1885, the Swanage branch lines closure by British Rail caused much controversy and saw five years of opposition and campaigning by locals and councils.

The final service was made up of two three-carriage 1957 British Railways diesel-electric multiple units No. 1110 and No. 1124, with the last train leaving Wareham at 9.45pm headed for Swanage and running through Corfe Castle at 9.55pm for Swanage.

The 500 passengers on board the service had purchased a specially printed British Rail Edmondson card ticket which cost 50p for an adult and 25p for a child. The last train sadly departed the gas-lit Swanage station at 10.15pm before passing through Corfe Castle at 10.24pm, finally pulling into Wareham at 10.40pm.

Following three years of tireless campaigning by railway enthusiasts and community volunteers, along with a referendum of Swanage residents during 1975 saw the town council offer the fledgling Swanage Railway Society receive a one year lease for the disused terminal station.

To find out more about volunteering with the Swanage Railway please contact the volunteer recruitment and retention officer Jonathan Evens on 01929 408466 or by email on: [email protected].