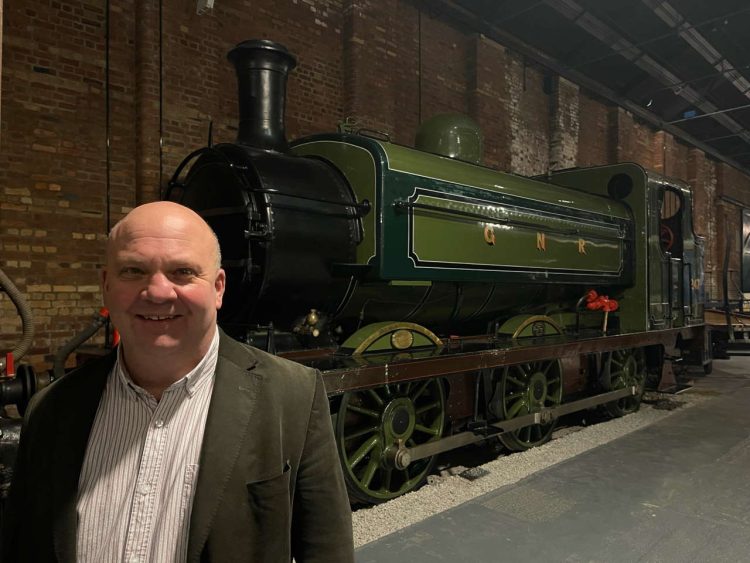 The Heritage Railway Association (HRA) is celebrating its 60th anniversary.

The association is the trade body that supports 200 of Britain’s best-loved heritage railways, as well as a variety of rolling stock groups and supporting organisations. It has its roots in two organisations, both dating back to the early years of railway preservation and restoration.

The ‘Railway Preservation Association’ was created in the very early 1960s, the first meeting being held on Saturday, 6 January 1962 with Captain Bill Smith as Chairman.

In 1959 he became the first individual to purchase a steam locomotive from British Railways when he saved LNER J52 Class No. 68846 from scrap; in preservation, the loco reverted to its former Great Northern Railway identity of No. 1247. That single act immediately changed the landscape of railway preservation.

Soon afterward, Captain Peter Manisty, who was at the forefront in creating the Bluebell Railway, took over the chair. The Bluebell was the first complete railway to be purchased from British Railways for preservation.

Under Capt. Manisty the organisation became known as the Association of Railway Preservation Societies (ARPS). Besides the Bluebell, the founding members included the Ffestiniog Railway, Midland and Great Northern Railway Society, Middleton Railway, South Devon Railway, and the Talyllyn Railway, as well as the forerunners of what would become the National Railway Museum.

In the 1990s, the ARPS merged with the much older Association of Independent Railways (AIR), which was formed in the 1930s to represent railways that were not included in the 1923 ‘big four’ grouping of the Great Western, London and North Eastern, London Midland and Scottish, and Southern railways.

The two bodies came together to form the Association of Independent Railways and Preservation Societies (AIRPS). The first chairman was the well-known publisher of railway books, Ian Allan, who had held the same role for the AIR. The former ARPS Chairman David Morgan became Vice- Chairman of the new organisation.

The AIRPS became the single trade association for the whole sector. Its sphere of influence grew as the advice and support it provided to members increased.

In 1998 the AIRPS was renamed the Heritage Railway Association, and since then it has responded to the rapidly changing world in which its members now operate. The association works closely with industry regulators and has been active in developing links with the government while supporting and championing heritage rail.

A 60th-anniversary celebration is planned to take place later this year as long as coronavirus restrictions allow.

Chief Executive of the Heritage Railway Association, Steve Oates, said: “During the 60 years since the creation of the association, our 300 members have achieved what many thought impossible. They have rebuilt routes that had vanished almost entirely, they have rebuilt locomotives and carriages, and they have achieved levels of preservation second-to-none, with everything from Victorian cliff railways to mainline steam and diesel locomotives.

“From its very beginnings, the HRA has been driven by the same passion as its members to maintain, operate and develop railways. The determination has not been dimmed and the Heritage Railway Association is at the forefront of ensuring that sector can continue to flourish for the next 60 years.”

Chairman of the Heritage Railway Association, Brian Simpson, said: “The vision of the great founding members like Captain Smith, Captain Manisty, David Morgan and their counterparts should never be underplayed. The whole of the heritage railway world owes them a debt of gratitude to this day.

“Our challenge is to cherish the preservation ideals of these great men while navigating the ever-increasing complexities of the modern world to ensure that heritage rail can flourish for the next 60 years. Fortunately, I think the Heritage Railway Association is in great shape to do just that.”

Vice-Chairman of the HRA, Chris Price, said: “Celebrating our 60th anniversary is a fantastic feat. Now more than ever the Heritage Railway Association is important to the sector. Individually even the bigger railways are relatively small voices in the wider world, but together we make a decent contribution to the economy of the UK and to its cultural heritage. We need to shout about that.
“We’ve done very well in the past and I believe we’re set up to do even more in the future.”

President of the Heritage Railway Association, Lord Faulkner, said: “From the outset, the organisation has been a force for good in heritage rail. It has helped member railways flourish and represented them everywhere.

“Heritage rail has matured and changed so much over the last 60 years, but the challenges have not gone away. Today the HRA is at the forefront of ensuring that everyone can continue to enjoy travelling on historic railways more than ever.”