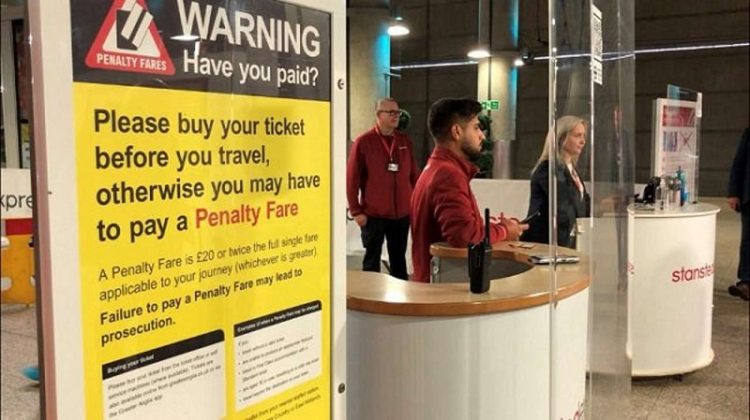 Train operator Greater Anglia have recovered over £4 million from fare dodgers and fraudsters in 2021 through fines for fare evasion and repayments for claiming compensation or refunds for journeys they didn’t make.

Penalty fares can be issued to rail passengers who travel on trains without a ticket or travel with an invalid ticket.

This may be an adult travelling on a child rate ticket, claiming a railcard discount without a railcard or using an Oyster Card outside the Oyster Card boundaries of Shenfield and Broxbourne/Hertford East.

The penalty fare is £20 or double the single fare if the cost of a single ticket is more than £10.00.

Greater Anglia can also prosecute people who do not pay their penalty fares in Magistrates’ courts, as well as fare evaders for not having a valid ticket. This includes passengers travelling without a ticket and having no intention of buying a ticket with no means of payment on them, or travelling with a ticket that is only valid for part of their journey.

During 2021, Greater Anglia’s fraud department uncovered £451,184.16 in fraudulent delay repayment claims, where passengers had claimed delay repayment compensation for journeys they hadn’t made.

Passengers were firstly asked to repay the money they had fraudulently claimed. If they did so, then no further action was taken.

If they didn’t, their details were passed on to British Transport Police for investigation and prosecution, and several cases are currently outstanding.

The company’s Fraud Team recovered a further £287,331.86 in settlements from passengers they reported for fare evasion. The team operates undercover and investigates longer-term fraudulent travel, targets individuals committing such fraud, and can follow and stop passengers during any part of their journey.

Another £8,000 was recovered from passengers claiming refunds with a third-party retailer for journeys they never made.

Money recovered by Greater Anglia in fines, court fines and costs, and out of court settlements in 2021:

The company’s revenue protection officers (ticket inspectors) issued over 54,000 penalty fares in 2021, to the value of £1.63 million.

Kim Bucknell, Greater Anglia’s head of revenue protection, said: “People not paying for their journeys or fraudulently claiming delay repay compensation or refunds for journeys they haven’t made are effectively stealing from Greater Anglia.

“It’s not acceptable – it’s the equivalent of going into your local supermarket and either not paying for your shopping or only paying for some of it.

“The railway is now funded by the Government – and ultimately the taxpayer – so not paying for a ticket or making a false delay repay claim is effectively stealing from other taxpayers.

“Not paying fares and making fraudulent claims means there is less money available to keep the railway running and improving for everyone – which could result in fares going up higher or other implications.”