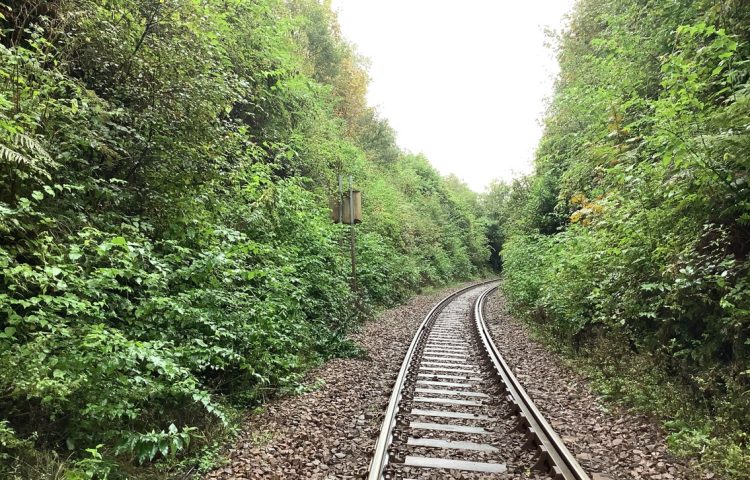 Network Rail is to remove trees and vegetation between Craigendoran and Helensburgh Upper on the West Highland Line as part of a trial to improve lineside biodiversity.

Cutting down trees and vegetation across this 1.5-mile section of railway will reduce delays caused by leaf-fall.

After the trees have been removed, the area will be replanted with trees and shrubs native to the area, including Holly, Hawthorn, Blackthorn, Rowan, Hazel, and Elder. The site is located between the two red points on the map below.

The replanting will benefit local wildlife and is part of a trial that, if successful, will help Network Rail work towards targets that will see no net loss of biodiversity by 2024, with an overall net gain by 2035.

As well as the replanting, habitat piles will be created throughout the site to enhance existing natural features, and bat and bird boxes will be installed throughout the site. The enhanced habitat will be beneficial for several species including nesting birds, foraging bats, and various invertebrate species, and will also provide cover for badgers and hedgehogs.

The work starts this week and will last for approximately 10 weeks when all woody vegetation within a minimum of four metres of the track will be cleared. Any trees that could obstruct the line if they were to fall will then be pruned or cut down to remove any risk to the line.

Unmanaged vegetation can pose a serious risk to rail safety, either from trees falling onto the line during bad weather or from overgrown branches and foliage which can obscure signals from a driver’s view.

Before the work started on improving biodiversity on the West Highland Line, surveys have been carried out to identify breeding birds and other protected species, and to identify trees that should be retained either for biodiversity reasons or for their potential as bat roosts.

Kirsty Armstrong, Network Rail project manager, said: “We look after thousands of miles of railway embankments and constantly work to manage trees and vegetation so that what grows lineside is safe and does not cause delays to trains.

“Our new approach will compensate for what is removed through managed replanting and transform low-value land into areas that will become species-rich, but also safe for the operation of services.

“We will be carrying out as much of the work as possible during the day to minimise the amount of disruption to our neighbours. There will, though, be sections closest to the line where we have no alternative but to work at night.

“Our teams are always mindful of the impact their work can have on lineside neighbours and do what they can to minimise noise from site. We want to apologise in advance if anyone is disturbed by the work.”

Those living closest to the line have been advised about the work in advance, but if anyone has any questions or concerns about the work, they can contact Network Rail’s 24-hour national helpline on 03457 11 41 41.