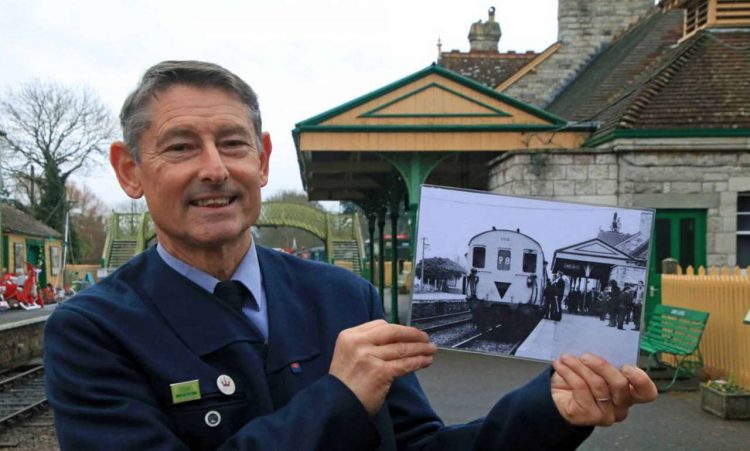 A volunteer at the Swanage Railway who rode on the last British Rail train from Wareham to Corfe Castle and Swanage is to drive a special 50th-anniversary train service marking the event.

Peter Frost grew up in Corfe Castle and was a young teenager when he travelled on the last British Rail train to Swanage on New Year’s Day, 1972.

He watched the line being demolished before helping to rebuild it.

On Saturday, 1 January 2022 he will drive a heritage British Railways 1960-built three-carriage Class 117 diesel multiple unit between Norden, Corfe Castle and Swanage to mark the 50th anniversary of the line’s closure.

The last British Rail train ran from Wareham to Corfe Castle and Swanage on the evening of Saturday, 1 January 1972, and the line closed on Monday, 3 January 1972.

To commemorate the 50th anniversary, five trains will run between Norden, Corfe Castle, Harman’s Cross and Swanage from 10.30 am to 4 pm on Saturday, 1, Sunday, 2 January, and Monday, 3 January 2022.

A special commemorative heritage Edmondson card ticket will also be given to passengers travelling on the trains.

Tickets are available in advance and on the day from station booking offices, and cost £10 for adults and £5 for children aged five to 15 years, with children aged under five travelling free.

A delighted Peter, who became a Swanage Railway volunteer driver in the early 1980s, said: “It’s a great privilege to be chosen to drive the last British Rail train 50th-anniversary service because in 1972 bringing the railway back seemed impossible.

“It doesn’t seem 50 years ago since I rode on the last British Rail train to Swanage and back to Corfe Castle as a 13-year old. The train was packed and it was a deeply sad occasion because everyone thought the line was gone forever.

“I had known the Swanage branch as a child and its staff were extended members of my family. It was very sad to watch British Rail run down the train service and make staff redundant, during its five-year attempt to close the line.

“Watching the track being ripped up during just seven weeks in the summer of 1972 was very depressing because rebuilding the line seemed an impossible task,” he added.

After three years of campaigning by railway enthusiasts and community volunteers, and following a referendum among Swanage residents, the town council gave the fledgling Swanage Railway Society a one-year lease of the disused terminal station in 1975.

Peter explained: “Gaining access to the boarded-up station on the first day of restoration work in February 1976, was incredible because we had been given the chance to rebuild the railway. Many people thought it was an impossible task but we wanted to give it a try.

“It took just seven weeks to rip up the tracks and more than 30 years to relay them. Several generations of volunteers have worked tirelessly to rebuild the Swanage Railway which is a tribute to the power and determination of the human spirit,” he added.

The ten-mile branch line from Wareham to Swanage was opened in 1885, but despite five years of protests against closure by local people and councils the line closed on 1 January 1972. The last train to Swanage departed from Wareham at 9.45 pm, and was hauled by two three-carriage 1957-built British Railways diesel-electric multiple units. It was boycotted by protesting Wareham councillors angry at the closure of the line. The train had 500 passengers on board, who had each purchased a specially printed Edmondson card ticket costing 50 pence for an adult and 25 pence for a child. The last train to Swanage departed at 10.15 pm and arrived at Wareham at 10.40 pm.

The Swanage Railway is always looking for new volunteers. Anyone interested in finding out more should contact Swanage Railway volunteer recruitment and retention officer, Jonathan Evans, on 01929 408466 or email [email protected].

To help protect passengers against coronavirus, the Swanage Railway uses a long-life anti-bacterial spray on its trains and stations, the trains have opening top-light windows or pull-down windows in the doors to increase ventilation, and passengers are required to wear face coverings on the trains. The Victorian T3 class locomotive hopes to see the funding raised to restore its tender and get the...