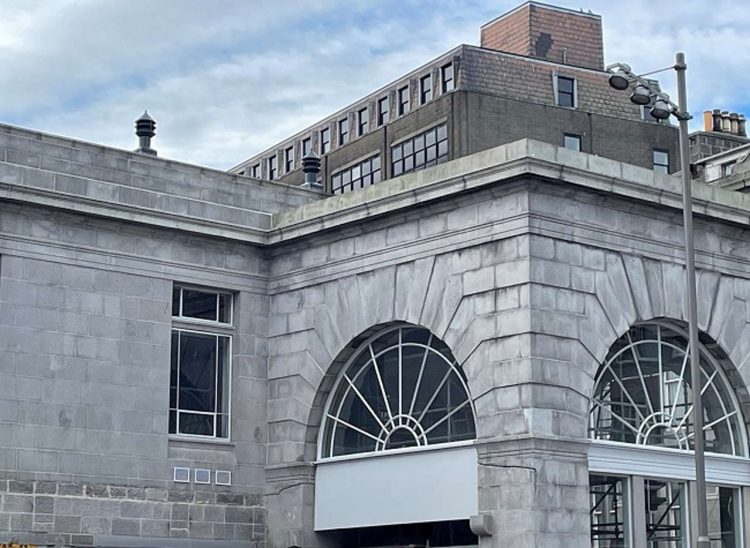 ScotRail is restoring one of Aberdeen’s historic landmarks as part of an £8million redevelopment of the city’s railway station.

The station is Grade A listed and includes the imposing North Pavilion, and its redevelopment will include:

The station is an important part of the heritage of Scottish railways, but since the early 2000s, it has faced major maintenance challenges as it has fallen into disrepair.

It was originally built in 1867, but construction of the present building only began in 1913 and was completed after the First World War.

Around 1920, the North and South pavilions were added, and with the North Pavilion being an important part of the structure, it will be redeveloped along with the rest of the station.

During survey work, a number of defects were discovered in the pavilion, including:

The aim is that the repairs should be sympathetic and retain the pavilion’s appearance as close as possible to the original. To achieve that aim, some pre-existing materials will be recycled, and the solid granite treads in the Guild Street entrance will be removed and modified so that the granite can be used for the new stairs.

Kirsty Devlin, ScotRail Head of Projects & PMO, said: “This is a wonderful opportunity to restore an important building, which is part of the heritage of Aberdeen, for future generations.

“We are enjoying working in partnership with Austin-Smith:Lord, Morrison Construction, the Railway Heritage Trust, the city council and Network Rail to make sure the North Corner Pavilion can be enjoyed for many more years to come.”

Andrew McCafferty, Austin-Smith:Lord’s Project Director, said: “Having worked on the project since January 2017, we consider it a privilege to be part of the team redeveloping this 100-year-old station built for Scotland’s third largest city.

“By conserving, repairing and caring for the listed structures, the longevity of this significant Aberdeen landmark will be assured for future generations to enjoy, and enhancing the station environment will improve the passenger experience.”

Andy Savage MBE, Railway Heritage Trust Executive Director, said: “We have been very pleased to support this project, bringing more of Aberdeen station up to a good standard.
“With other work that we have funded, that ScotRail and Network Rail Scotland have carried out, the whole station is steadily improving, and making its contribution to the City of Aberdeen as it should.”

Neil Smyth, Construction Director for Morrison Construction, commented: “We are delighted to be playing our part in bringing this historic part of the station building back to life.
“One of the most satisfying aspects about this great project is the way we are restoring such a central part of the fabric of Aberdeen, and we look forward to completing this phase and the wider station for the benefit of travellers and local people alike.”

“One of these current developments sees a substantial revamp of Aberdeen Rail Station’s North Pavilion which is being restored and adapted to be brought back into use as a restaurant/cafe.

“The building contributes positively to the historic townscape. The external fabric underwent a full condition survey and repairs were made to the roof, leadwork, rainwater goods, stonework and the whole building was repointed with a lime mortar.

“The interior of the building has been sympathetically restored and adapted to make it more accessible. The works will bring an important listed building back into active use and will see another attraction aimed at bringing more people, both local and tourists, into the city centre.”

Work is being carried out to reinstate the Levenmouth rail link between Cameron Bridge and Thornton Junction in...