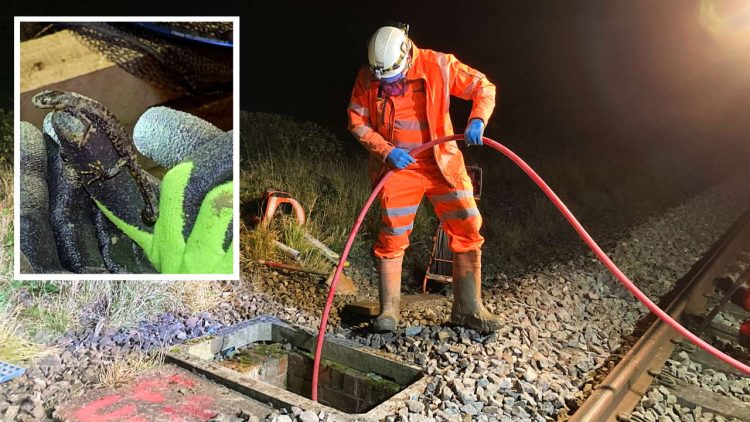 Network Rail staff were clearing out drainage systems on the track near Droitwich when they found two great crested newts and 11 common toads.

The newts are a European protected species, meaning the animals and their eggs, breeding sites, and resting places are protected by law.

Great crested newts are named for a distinctive long, unbroken crest on the male’s back and tail during the breeding season. They are native to Britain and can grow up to 17 centimetres long, making them the country’s largest newt species.

Staff have strict rules to follow when they are working in drains to make sure they aren’t disturbing any unexpected residents, as it is an offence to injure, kill, take, or disturb them in the UK, which means they can only be moved with a special licence.

When they found the 13 amphibians, the team stopped work immediately and called for a Network Rail ecologist to come to the site. Before the maintenance work continued, 20 more drainage pits were checked for signs of life.

Sam Jones, ecologist at Network Rail, said: “It’s great we were able to relocate these 13 animals to a safe place, where they hopefully won’t be disturbed by our work on the railway again.

“As one of the country’s largest landowners, Network Rail is responsible for a vast amount of land and wide range of wildlife habitats. Teams are well aware of their responsibility to protect the lineside environment – in particular when it comes to protected species.”

Wendy Carter, communications lead at Worcestershire Wildlife Trust, said: “It’s good to hear that Network Rail have rescued our amphibian friends. It’s an important and timely reminder that many species of wildlife will have tucked themselves away somewhere cosy to survive the winter, which gives us a great excuse not to do too much tidying in our gardens during the cold winter months.

“Log piles and clumps of long grass may provide a great hideaway for toads, frogs and newts, piles of leaves act as a duvet and seed heads and hollow stems provide refuge for many of our insects. It’s important to remember, however, that great crested newts are a protected species so unless you are moving them out of immediate danger, only licensed people should handle them.”

Network Rail is encouraging biodiversity on the railway. Details of what the company is doing can be seen at: http://www.networkrail.co.uk/sustainability/biodiversity-on-britains-railway/