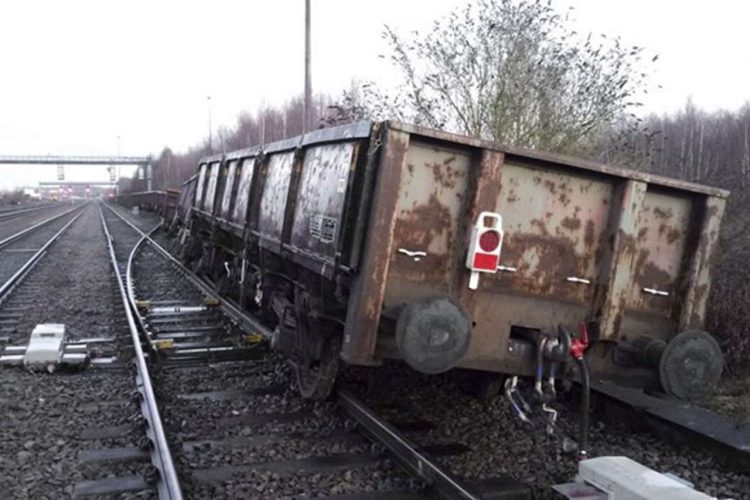 RAIB release their findings from the runaway and derailment of wagons at Toton in Nottinghamshire which took place on the 17th Jan 2021.

The accident took place at 04:42am on Sunday the 17th of January 2021 and saw a rake of 22 wagons, of which 21 were loaded, run away from Old Bank sidings in Toton. As the rake escaped it passed a red signal which raised an alarm, alerting the signaller. The rake then passed a further red signal which shortly after lead to four wagons derailing due to reaching the end of the run-out rails associated with a set of trap points.

Trap points are used to derail out of control vehicles and act as railway safety devices.

The trap points worked as they should, derailing the unauthorised movement. The derailment saw the leading two wagons stopped derailing foul of the adjacent running line, with no trains nearby when the derailment took place. The escaped rake of wagons covered a total distance of about 0.6 miles (1.0 km) during the accident.

RAIB’s investigation revealed that the rake of wagons ran away due to nobody securing them by either handbrakes or scotches following their stabling at Old Bank siding the previous evening. Due to this, the wagons were only held by air trapped within the brake system, which eventually leaked away. The wagons were then able to move freely as the incoming train they were part of had not been secured previous to its locomotive being uncoupled due to there being a miscommunication by ground staff that were on duty about who would make the train secure.

Further underlying issues were that staff at Old Bank sidings were regularly leaving trains unsecured for short period and this had remained unidentified by DB Cargo’s safety assurance undertakings. A second underlying issue was also identified in that DB Cargo had no clear process in place which established tasks required for trains arriving and no process to provide confirmation that these tasks had been actioned. The result of the runaway was possibly worsened due to the leading two wagons being foul of the adjacent running line following derailment at the trap points.

RAIB has discovered that Network Rail’s risk assessment processes for new and existing trap points only covered scenarios that did not apply for uncontrolled runaway vehicles and did not consider that such vehicles once derailed, could move as far as they did in this accident.

RAIB has made four recommendations as follows:

Firstly, DB Cargo should establish the degree to which vehicles are being left unsecured in their yards and sidings and must identify and rectify the possible reasons for this.

Secondly, DB Cargo should review processes for trains arriving in their yards and sidings, making it clear what tasks should be carried out and who is responsible and how completion of this process is communicated.

Thirdly, DB Cargo should review their current supervision, monitoring and auditing of safety in their yards and sidings.

The fourth recommendation has called upon Network Rail to review its risk assessment process for trap points to take into consideration the risks of an adjacent running line becoming fouled by an uncontrolled vehicles runaway.

Two learning points have been found by RAIB, firstly to remind drivers and staff undertaking ground staff duties of the importance of securing vehicles before detaching locomotives.

Secondly, is that the initial purpose of trap points located on the exit of sidings, or the exit of a goods line connecting to sidings, are to protect running lines from runaway vehicles.

You can read the full report over on the RAIB website here.