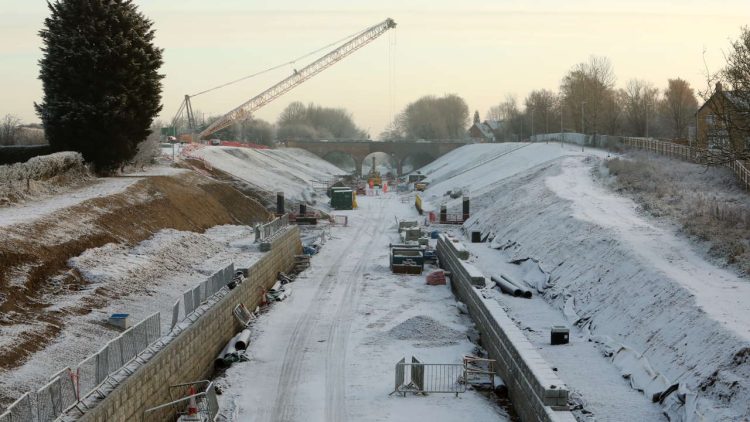 Platform construction is underway at a new railway station being built at Winslow in Buckinghamshire as part of the East West Rail project.

Serving communities across the heart of the country, East West Rail aims to provides better, cheaper, quicker, and greener transport between Oxford, Milton Keynes, and Cambridge, and Winslow is right at the heart of it.

A 250 tonne crawler crane is being used to lift over 500 pre-cast concrete platform units into position within new railway cutting. As there is limited space available on site, a smartphone app has been developed to allow the platform units to be called for delivery in the exact construction sequence. The crane’ ‘lattice boom’ is 62-metres long , which is taller than Nelson’s Column.

After the platform has been installed, work will begin in spring 2022 on the new station building, followed by the new track being laid in early 2023.

Mark Cuzner, East West Rail Alliance project director, said: “This is a huge step for people in Winslow who haven’t been connected to the railway network for decades. With the platform units now being installed you get a real sense of what the station will look like when finished. East West Rail will bring people significant benefits and better access to housing and jobs, while providing reliable, quick, environmentally sustainable journeys and more affordable travel.”

Simon Blanchflower CBE, chief executive at East West Railway Company, said: “This is a major milestone for the project, with a new station at Winslow set to benefit communities and businesses in and around the town with an alternative, sustainable way to travel across the region.

“Whether it’s linking Winslow businesses with the best talent from along the route or providing families and friends with a way to connect without driving on the region’s busy roads, East West Rail will help local communities meet the challenges and changes in modern life and leave a lasting legacy for the region.” Construction of East West Rail between Bicester, Bletchley, and Milton Keynes should deliver a 10% net gain in...