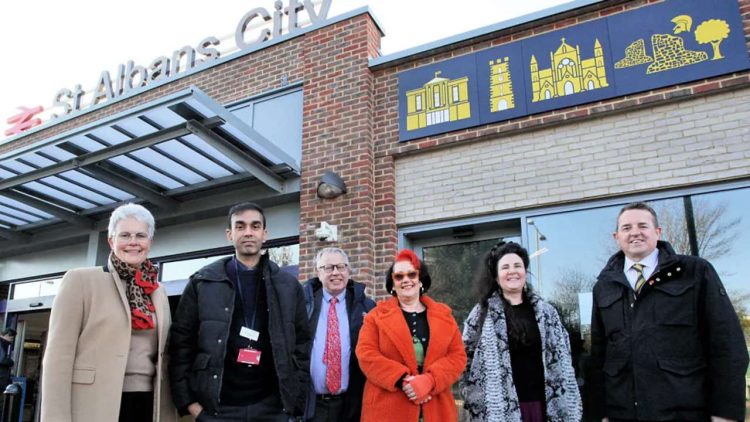 A mural has been unveiled above the entrance to St. Albans City station that depicts some of the city’s major attractions.

Thameslink installed the mural to promote St. Albans as a visitor destination

The artwork was created in partnership with St Albans BID (Business Improvement District), who provided the individual symbol designs, and Groundwork East, a community and environmental charity that managed the manufacture and installation.

The mural has four golden symbols, which represent the city’s Old Town Hall, Clock Tower, Abbey, and the remains of Roman Verulamium. Local company Precision Engraving and Profiling Ltd. engraved the symbols into a metal base.

Thameslink’s Managing Director, Tom Moran, said: “We called out to communities to help us brighten up their stations, and we’ve been amazed by the quality and quantity of artwork that’s been provided. We’ve commissioned over 200 works in the past year – that’s enough for one in every room of the Shard’s Shangri-La Hotel!

“Like many of the projects, the St. Albans mural has been inspired by much-loved local attractions and produced by a true local partnership, involving Groundwork East, the local BID and Visitor Partnership, and the City Council. These station enhancements don’t just make our stations more vibrant and inspiring for our customers – they give us an even stronger bond with the communities we serve.”

Denise Parsons, Manager of St. Albans BID, said: “We’re delighted to have worked closely with the Thameslink team to produce this amazing 3D artwork, which is a great addition to our busy city centre station. The design complements our existing ‘Enjoy St Albans’ branding boards on display, which have been welcoming visitors for the last 12 months.”

St. Alban’s BID has also launched a Christmas trail to encourage families to explore the city over the festive season. Thameslink is supporting the trail, which is named the “Nutcracker Trail” and has sited15 nutcracker soldiers around the city. One of the soldiers has found a home at the station, and people who collect the names of all 15 soldiers can enter a prize draw with the chance to win a £250 or £50 gift voucher. The competition runs until Sunday, 2nd January.